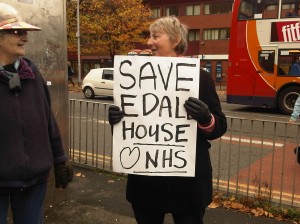 The Fight For Edale

The campaign to save Edale Hospital Unit will be next ‘gathering outside of Asda & Iceland’s stores at Old Church Street, Newton Heath on Tuesday 6th December, 2011 at 11am-3pm all welcome. In a new report produced by Manchester Health Intelligence Team a chart   shows up areas of Manchester with the highest Mental Health need being indicated in “Scarlet” red. The chart made up of different shades of red-light pinks [Hence the title] proves that there is a link between poverty and mental health. Please come along and sign our petition and view the chart. MUN wishes to see more money spent on the poor and more investment in Mental Health services to meet the highest need, not less.

STOP RIGHT NOW THE 25% CUTS IN MANCHESTER MENTAL HEALTH SERVICES. PLEASE CONTACT YOUR MP TO ASK THEM TO SUPPORT TONY LLOYD MP IN HELPING HIM TO STOP THE CLOSURE OF EDALE HOSPITAL UNIT. MANCHESTER USERS NETWORK, SAY NO TO CLOSING EDALE. A PUBLIC MEETING WILL BE HELD AT THE METHODIST HALL OLDHAM STREET, MANCHESTER ON WEDNESDAY, 07 TH, DECEMBER, 2011 at 6PM SPEAKER:- KAREN REISSMANN , UNISON NATIONAL EXECUTIVE. YOUR CHANCE TO TELL THE GOVERNMENT NOT TO CLOSE EDALE AND STOP THE 46 JOB LOSSES, PART OF MMH&SCT CUTS OF 25% 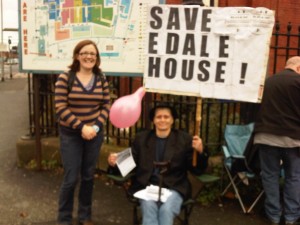 Everyone Wants To Save Edale!