MUN also took flying pickets to many of the NHS sites affected by the walkouts. 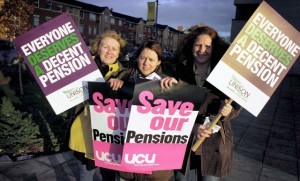 Thousands of public sector workers took to picket lines across north Manchester as part of a massive day of action.

The city was at a standstill as council staff, teachers, job centre workers and hospital staff walked out over pensions.

Almost every school in north Manchester was closed for business, libraries remained shut and many leisure centres operated a skeleton service.

Unions claim plans to increase their pension contributions and make them work longer are unfair.

Pat McDonagh, secretary of Manchester council’s Unison branch, said: “Workers have been targeted for attacks on our pensions to pay for the crisis of the banking sector.”

Dozens of cars honked their horns in solidarity with the staff, who say they will be ‘robbed’ of their pensions.

One of the women on the picket-line was 86-year-old Margaret Batton.

She was one of the first nurses to work for the newly-formed National Heath Service and was at Trafford General Hospital when Nye Bevan first launched the service.

Margaret said: “I’ve come out today because I’m sick about what the government is doing to the health service.

“They have left it in a mess and I felt I had to do something.”

Patients’ group Manchester Users Network also took flying pickets to many of the NHS sites affected by the walkouts.

Paul Reed, from the network, said: “The more cuts that the government impose, the less safe the NHS is.

“We want to protect the pensions of those who cater for patients with mental health needs. Cuts will lead to the loss of life.”

Some leisure centres were also affected by the pickets.

At North City Leisure Centre, in Harpurhey, seven staff from Unison and Unite walked out over the pension changes.

Many regular visitors to the swimming baths there refused to enter the premises in solidarity with the striking workers.

North City Library was closed as members of Unison picketed.

The college was also closed, with lecturers from UCU joining the main march in Manchester city centre.

Road sweepers and council staff from both GMB and Unite unions also went out.

David Carden, who lives in Moston and has been a street cleaner for 15 years, said: “Our pensions are not gold-plated.

“We are ordinary people and we are being robbed.”