A demonstration will take place outside the Labour Party conference this weekend to highlight Labour Party councils slashing jobs and services for people with mental health issues. Campaigners from Salford will join groups from Manchester and the North West to show Ed Milliband and co that they should be opposing cuts, not imposing them.

In Salford, the Labour Council and Labour Mayor are proposing to axe community care workers who organise groups and drop-ins for people with mental health issues.

In the Labour run Manchester Council it’s more or less the same story – some of the most vulnerable people in society having vital health services slashed.

It’s certainly not the actions expected of Labour Councils.

Now campaigners are taking the fight to this weekend’s Labour Party Conference to try and get the cuts reversed. 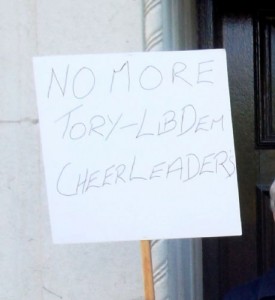 “We’re clear that taking staff out of groups and drop-ins that have long supported service users could cost lives” says Steve Cullen, a service user and Vice Chair of Salford’s

“We want the Council to think again” he adds “and if that means showing them up in front of their own Party then that’s what we’re prepared to do.”

Salford Council staff, service users and community activists will be joining a protest sponsored by UNITE the Union to `Defend the NHS! Defend Mental Health Services!’,

and everyone is welcome to attend. Meanwhile Monday night sees a large Save Our Mental Health Services public meeting being held in Salford… 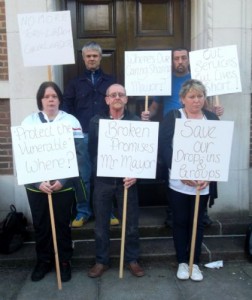