SALFORD MARCHES IN LONDON FOR A FUTURE THAT WORKS

Three coaches left Salford on Saturday morning, joining others who had taken the train, to march with over 150,000 people through the streets of London against the ConDem Government and for an alternative that works. 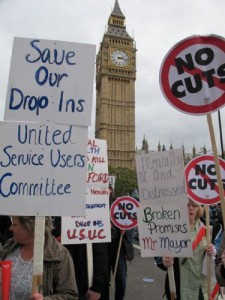 6:30am Saturday morning and our coach set off from Cromwell House in Eccles with mental health service users, their carers and trade unionists to head down to the TUC March For A Future That Works. This was a totally new experience for most of them but they were determined to take their protest to London.

We got there around 11am, which was quite late, and we were at the back end of 150,000 people marching from London Bridge to Hyde Park. It took around four hours to walk the route, past the Houses of Parliament, Trafalgar Square and the London Eye.

Behind us was a band of social workers, doctors and nurses playing samba, dancing with huge knives representing cuts to the NHS, and dressed in pig heads, and Cameron and Clegg masks.

When we got to Hyde Park we heard Ed Miliband’s speech, going on about how Labour will make a difference and stop what the Tories are doing…but also how they will have to make cuts. Everyone started to boo – it was very strange.

We then heard from the new General Secretary of the TUC, Frances O’Grady, who spoke of strike action to force the Government to stop austerity. We all signed the petition for a 24 hour General Strike.

The support on the march for the campaign against mental health service cuts in Salford was brilliant. The United Service Users Committee, USUC, made loads of connections, were swopping e-mail addresses all day, and I think it gave everyone the impetus to carry on the fight with renewed vigour.

All in all it was a fantastic, if tiring, day but everyone said they’d love to do it again