‘Judicial Review’ : Is the demand of Ancoats Folk At Heart !

A campaign group is seeking a planning lawyer to work on a pro bono basis towards a judicial review of controversial approval to demolish the historic Manchester building. 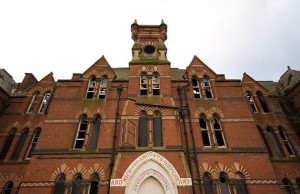 n June Urban Splash won minded to approve consent to demolish the Grade II-lised Ancoats Dispensary building despite opposition from locals and SAVE. Linda Carver of Fight2SaveAncoatsDispensary said: ‘The only way the community could stop such cultural vandalism would be to go through Judicial Review. However, as you can imagine we would need a lawyer to take this on under a pro bono basis as our small campaign group have no funds to speak of.

At this late stage we can only hope such a person makes himself or herself available.’ The Manchester-based developer applied to demolish the building after development agency funding for its restoration was withdrawn.

A section 106 is pending to be agreed before demolition proceeds and a time scale for the agreement has yet to be confirmed.

Councillor Jim Battle, deputy leader of Manchester Council, said: ‘It is with great disappointment that a workable solution to save the Ancoats Dispensary has not been found and our obligation to make a decision on the fate of such buildings is made with a heavy heart. ‘We take the preservation of the city’s heritage incredibly seriously and no decision is taken without extreme care. But it is hoped that through careful reclamation we can save as many original features as possible to be used in future developments at the site – a proud reminder of the hospital’s important role in Ancoats history.’

In a statement, Urban Splash said it was sympathetic towards those wishing to retain the historic hospital building but argued flattening the dispensary was the ‘only available option’ due to a lack of realistic funding options.

It added the building had been offered to several Building Preservation Trusts and marketed extensively but no credible plans to save it had emerged.

It said: ‘We are happy to agree to enter into a [section] 106 agreement to see what features of significance can be salvaged, stored and hopefully re-used so that there will be some tangible record of the unique institution which was the Dispensary and Hospital.’

(Read the full statement below). Ancoats Dispensary was expected to undergo a mixed-use transformation as part of the company’s 2001 Will Alsop-designed masterplan for the regeneration of Manchester’s New Islington district.

Urban Splash statement We are progressing with complying with the terms of the planning consent and working these through.

We are sympathetic to peoples’ desire to save the Dispensary and are only in this situation because of the offer and subsequent withdrawal of the RDA funding, midway through the restoration works.

Clearly if this money was made available again it would provide us with an option however we are led to believe that there is no real possibility of this.

We have spent the last 20 years saving buildings and this episode saddens us deeply.

Urban Splash has an enviable track record in transforming the fortunes of dilapidated and disused buildings around the country.

We have saved schemes including the Royal William Yard in Plymouth, Lakeshore in Bristol, Fort Dunlop and Rotunda in Birmingham, the 3 Towers and the Britannia, Albert, Waulk and Longlands Mills in Manchester, the Vanilla and Tea Factorys in Liverpool, the Matchworks estate in Speke, the Midland Hotel in Morecambe. Saxton in Leeds and Lister Mills in Bradford.

At each we have created renewed communities in which people can live work and play. It is with great reluctance that we have reached this point with the Dispensary, something which is outside of our control and contrary to our usual approach to saving buildings.

The best explanation of the reasons behind the decision to demolish the building are those which were outlined by the planning consultant Paul Butler, of Paul Butler Associates. These are the reasons he outlined to the planning committee: We headed our heritage report for the application, which was submitted last July, ‘the reluctant case for demolition’ and it is with reluctance that we believe demolition is now the only available option. Urban Splash took on the Ancoats hospital site, which had lain derelict for man years after the NHS closed their operations in 1989, in December 2001.

Since then Urban Splash has invested considerable resources trying to find solutions for the site and for the Dispensary, which has always featured as a key part of the New Islington project. A summary of the planning position is in the committee report.

The property market collapse of 2008 forced a rethink of the position. The best option seemed to be a mothballing one – never ideal and not one generally recommended – and work started on this in early 2010 supported by a £1M grant from the NWDA.

The intention was to carry out repairs to the structure, masonry, roof and floors in order to make the building safe, structurally stable and weatherproof until market conditions would support a refurbishment scheme.

As you have heard from the planning officer, the majority of the grant funding was withdrawn following government spending cuts and the abolition of the NWDA, leaving Urban Splash with no option but to stop work.

The unfortunate result of all this – and the position we are now in – is that the building is in a precarious state.

The roof and floors were removed to facilitate repairs as part of the grant-funded repair package, now leaving the remains exposed and reliant upon a temporary scaffold system for support, without which the walls would collapse.

The building has been offered to various Building Preservation Trusts for £1. Heritage Works – the successor to the Ancoats Buildings Preservation Trust – undertook a detailed options appraisal study but the large conservation deficit and lack of grant funding meant they could not take on the building.

More recently Urban Splash has held discussions with The Greater Manchester Building Preservation Trust – a subsidiary of the Heritage Trust for the North West – which was also unable to offer a solution.

As the report points out, the building has also been on the market and extensively advertised, but there has been no credible interest from any party who could take on and save Dispensary.

The formal statutory tests and guidance, set out in the recent NPPF, have been met: English Heritage accept this and agree, reluctantly as well, that demolition is the only option available.

This is not an easy position for anyone involved with this to be in. Urban Splash have a deserved national reputation, acknowledged by SAVE and many other heritage bodies, as a unique organisation that has done probably more than any other company in recent years to save at risk buildings across the country.

As a Manchester headquartered company, it is an organisation the City can be proud of. However, the facts are inescapable in this case.

The withdrawal of the NWDA grant happened at the worst possible time and leaves the building in a perilous condition; there is no realistic prospect of funding in an sensible timescale to ensure the safety or the proper mothballing of the building; attempts to secure the intervention of a BPT, or other party, with the capacity to take on and save Dispensary have been unsuccessful.

The remains have barely survived two winters while Urban Splash has tried to find ways to save the building – the central tower was demolished in September last year because it was considered imminently dangerous – and this deterioration will inevitably continue, risking public safety and further increasing the cost of repair.

For all these reasons, regretfully, we conclude that demolition is now the only available option.

However, looking at it more positively, everyone hopes that the economic climate will pick up sufficiently for a scheme to emerge at some time in the future which will allow the regeneration of this key part of New Islington to proceed apace.

We are happy to agree to enter into a s106 agreement to see what features of significance can be salvaged, stored and hopefully re-used so that there will be some tangible record of the unique institution which was the Dispensary and Hospital.

We hope in these circumstances you can accept the views of the planning officer and agree.

Link to this story: https://www.manchesterusersnetwork.org.uk/2014/07/30/successful-lottery-bid-takes-historic-building-one-step-closer-saved/