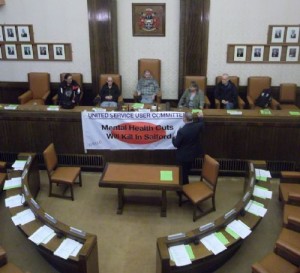 Campaigners against cuts to mental health services in Salford this morning occupied the Salford Council chamber as a meeting of the full Council was about to begin, taking over seats normally reserved for the City Mayor, Chief Executive and Ceremonial Mayor.

The police were called but the protesters left peacefully after Mayor Ian Stewart promised a meeting with service users tomorrow. He later apologised at the Council Meeting for not being `as responsive as I should have been’ to service users.

Councillors rolling up for today’s full Salford Council Meeting got a shock this morning as mental health service users, carers and a representative of Salford Against The Cuts occupied the council chamber where the meeting was due to take place.

Bright green leaflets were placed on all the councillors’ desks with two demands.

When it became clear that the campaigners wouldn’t leave, City Mayor Ian Stewart went into the chamber to try to negotiate with them. Vee Ball, Chair of USUC (United Service Users Committee) told Stewart in no uncertain terms that he was uninformed about current developments and berated him for not even acknowledging `countless emails’ on the subject that she had sent him.

The occupation of Salford Council chamber had come on the back of a number of recent incidents – including the arrest of a suicidal man who went to mental health services looking for help, the related closure and re-siting of drop-in groups, the alleged victimisation of USUC campaigners, and what those campaigners believe is a flawed consultation process on the future of mental health services (see previous Salford Star articles Mental Health Hell In Salford Part 1 and Part 2)

After Stewart arranged a meeting with service users and carers for tomorrow (Thursday), the protesters left the council chamber and the Council Meeting was able to get underway.

“I think to a certain extent we got something that we came for, which is that we got Mr Stewart pressured into meeting with us which he’s very cleverly and successfully avoided up until now” said Vee afterwards “He’s meeting with us tomorrow and we can bring with us the damaged and affected service users, to give him the real point of view, not the one that Greater Manchester West Mental Health Trust colours to him. He’s also agreed that we can address the next Council Meeting as an agenda item.”

The issues are complicated by the fact that Greater Manchester West Mental Health Trust provides mental health services in conjunction with Salford Council. The Trust controls the buildings where the drop-ins have been stopped but the Council provides the community care worker support for the groups, which it wants to change.

City Mayor Ian Stewart with occupiers as councillors arrive for the Council Meeting“Greater Manchester West Mental Health Trust should be taking some of the flak for all this and I’ve said it at every opportunity” said Vee “But Ian Stewart has the power to overturn Councillor Peter Connor, who makes the decision on the closure of the drop-ins and services, and the restructure of this mental health service. We want these services to be left alone because they work and Mr Stewart has the power to do that.”

Later on in the Council meeting Ian Stewart almost publicly apologised to the service users and carers explaining that “I haven’t been as responsive as I should have been…I will meet with them and attempt to understand the basis of their concerns. If I find that there is anything wrong I will take action.”