Two nurses have been struck off after a patient was found dead outside a mental health unit in Manchester. 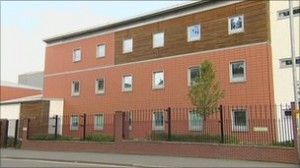 Peter Thompson, 41, was refused entry to Edale House on Hathersage Road, where he was a patient, on 3 April 2010 as he had a bottle of vodka with him.

He was told to stay by the ward entrance, where he was found dead 10 hours later.

Oladini Oyabadejo and Joseph Crentsil were found guilty of misconduct by the Nursing and Midwifery Council (NMC).

Their case was heard by the fitness to practise panel in London and Mr Crentsil, a night shift manager, and Mr Oyabadejo, a mental health nurse, were struck off.

Edale House, which was on the same site as Manchester Royal Infirmary, has since closed.

The inquest into the death of Mr Thompson, of Gorton, heard he had a long history of drink and drug abuse and had been addicted to crack cocaine and heroin.

The NMC said Mr Oyabadejo and Mr Crentsil did not make adequate checks on Mr Thompson in the hours before his death.

It said neither nurse tried to resuscitate the patient when they found he was not responding.

It said on finding he was dead, Mr Oyabadejo did not immediately call the emergency services but was seen on CCTV moving the body from outside the ward.

The NMC said Mr Oyabadejo and Mr Crentsil were not present at the hearing.

The pair are no longer employed by Manchester Mental Health and Social Care Trust.

Adrian Childs, director of nursing and therapies at Manchester Mental Health and Social Care Trust, said the trust was “totally committed to delivering the highest standards of clinical and compassionate care”.

He added: “This appalling incident was both shocking and distressing.

“Action was swiftly taken at the time to ensure such a lapse could never happen again and we are pleased that the NMC has supported our referral.”