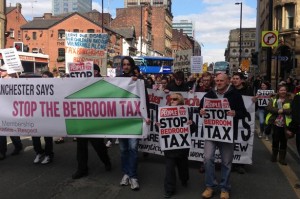 Witnesses say the middle-aged man sliced his throat from ear-to-ear with a knife as he spoke to an adviser
A Bedroom Tax victim yelled “I’m sick of all this s**t” before cutting his throat in front of horrified staff at a benefits office.

Witnesses say the middle-aged man sliced his throat from ear-to-ear with a knife as he spoke to an adviser.

Under the controversial plans housing benefit claimants now lose up to 25 per cent of their rent if they have unoccupied rooms.

There are exemptions for claimants if they or their partner requires an additional carer to stay overnight, but it does not apply to claimants with a disabled child.

Terrified staff hit an emergency alarm during the incident at the Runcorn benefits office and police and paramedics raced to the scene.

The wounds left him and the floor spattered with blood, the witness said.

It happened at about 2pm on Monday, at Halton Direct Link in Halton Lea shopping centre.

Cheshire police officers have spoken to the man, who suffered ‘minor injuries’, about his wellbeing.
No criminal offences were reported.

Halton Borough Council said he was receiving support following the incident, as are Link staff.
The witness, who was waiting in line to see an adviser, said no other residents reacted to the outburst but that staff seemed ‘a little bit shocked’.

He said: “From what I could see, the bloke had gone to see an adviser.

“He was upset about the bedroom tax and wasn’t getting through and he started to cut his throat on both sides and threw the knife on the floor and he had blood coming from his neck.

“There was a lot of blood but it hadn’t come out of his artery, he wasn’t gushing out blood.
“He went through the side of his neck from his ear to the front.

“It would have needed medical attention.

“Everyone was just sat about normal waiting to go and see the adviser. I was in the queue. Nobody did nothing.”

A Halton Council spokesman said: “We are aware of this incident. The person concerned is receiving appropriate support and we are supporting our staff who witnessed the incident.”