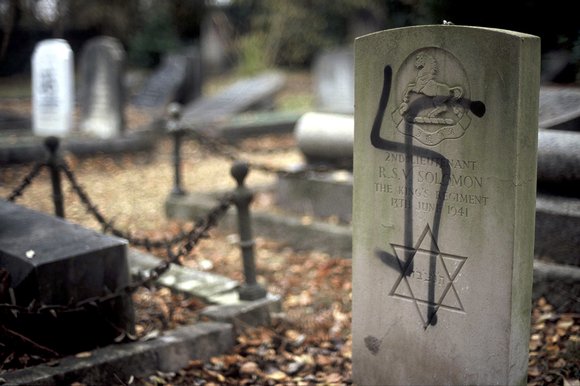 Attacks against Jewish targets such as cemetaries have been on the rise Photograph: Corbis

•Bricks being thrown at a synagogue in Belfast, smashing windows on two consecutive nights

•A group of Asian men who drove through a Jewish area of Greater Manchester, shouting “Heil Hitler” and hurling missiles at pedestrians

•A man using Twitter to call for a Jewish neighbourhood in London to be bombed so “Jews feel the pain” of the Palestinians. 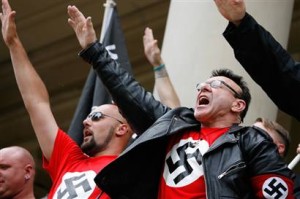 Pro-Palestinian demonstrators, angered by the mounting death toll in Gaza — which yesterday passed 1,000 — have even taken to the streets with placards declaring: “Hitler you were right!”

In a separate incident, a BBC journalist has been reprimanded after appearing to suggest that western politicians had failed to intervene in the Middle East crisis because they had been “bought” by the Jews.

In some cases, frightened Jewish families have decided to flee altogether.

Natan Sharansky, a former Israeli minister who was imprisoned for many years in a Soviet jail, wrote: “We are seeing the beginning of the end of Jewish history in Europe.”

Since the start of July, approximately 100 incidents have been reported to the Community Security Trust (CST), a charity that helps protect Jews across Britain.”This is well over double what we would normally expect to see and most of the incidents are linked to what’s going on in Israel and Gaza,” said Mark Gardner, the CST’s director of communications.

The last time there was such a “significant escalation” in anti-semitic activity, Gardner said, was during the Gaza War in 2009, when up to 1,400 Palestinians were killed. The latest hate incidents — many of which have been reported to the police — range from bomb threats and physical assaults to verbal abuse, sometimes involving child victims.

One of the most serious offences took place in the early hours of July 18 when a rabbi was attacked near a Jewish boarding school in Gateshead.

Four Muslim youths from Newcastle, aged 16, 17, 18 and 19, have been charged with racially aggravated common assault.

On the same day, a brick was thrown through the window of Northern Ireland’s only synagogue in Belfast. 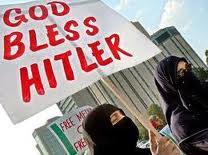 The repaired window was smashed again the next day. Police are treating the attacks as a religious hate crime and are appealing for witnesses.

On July 12, following a pro-Palestinian rally in Manchester, four or five cars full of Asian men are said to have driven through Higher Broughton, a suburb of nearby Salford with a large Jewish population, shouting anti-semitic remarks, including chants of “Heil Hitler.”

Police were told that the men also threw eggs and drinks cans at passers-by.

In north London, the CST says one pro-Israel organisation received a bomb threat by telephone, while a Jewish boy riding his bicycle had a stone thrown at his head by a woman wearing a niqab.

More than a dozen incidents reported to the CST have involved social media.

On July 11, a Twitter user called “Samet” posted an inflammatory message referring to an area of London with a large ultra-Orthodox Jewish community.

“I say we go bomb Stamford Hill up just so the Jews feel the pain,” he tweeted.

Last Saturday, at a pro- Palestinian demonstration in central London, a man carried a placard which read: “Save Gaza! Hitler you were right!”

The hashtags “Hitler- WasRight” and “HitlerDidNothingWrong” have also been widely used on Twitter. At another recent march in central London, protesters confronted a Jewish woman who was with her two young children and told them: “Burn in hell.”

David Ward, the Liberal Democrat MP for Bradford East, was forced to apologise last week after saying he would “probably” fire rockets at Israel if he lived in Gaza.

The row prompted a Muslim producer at the BBC to leap to Ward’s defence on Twitter with what appeared to be a reference to a conspiracy theory about wealthy Jews owning and controlling everything in the world.

Anish Shaikh, who says on his online CV that he has worked at the BBC since 1995, tweeted: “Attacking David Ward is a strategy to divert focus from real issue #Gaza politicians have no soul as they can be bought & sold by u know who.”

The producer, who has presented shows on the BBC Asian Network, including one devoted to Islamic music, refused to elaborate when repeatedly asked by other Twitter users to whom he was referring.

Shaikh was forced to delete his account after The Sunday Times approached the BBC and could face further disciplinary action.

The corporation said: “The BBC has clear social media guidelines which staff must adhere to, even when using personal accounts.

“We have spoken to Anish and reminded him of his responsibility to uphold our guidelines.

“He has deleted the account. We will meet him to discuss the matter further.”

Source for this story : http://www.theyeshivaworld.com/news/headlines-breaking-stories/250430/anti-semitic-attacks-scar-british-cities.html