Following the inquest at Stockport Coroners’ Court, Miss Golton’s parents, who live near Grenoble, France, said they hoped the death would highlight growing concerns over mental health in England.

Her father, Reverend Alan Golton, 85, said: ‘Our daughter’s untimely death is obviously related to the adequacy of mental health services.

‘In our opinion mental health services are underfunded in relation to other forms of illness and they’re obviously very complicated due to the number of referrals that need to be made for treatment.

‘It’s much more difficult to assess the need to hospitalise someone who is mentally ill than someone who has had physical injury. It’s very difficult for any person to make that decision. For us Rowena’s deterioration happened so quickly. The last six months were very rapid.’

Miss Golton – described as ‘lively, gifted, extremely intelligent and highly articulate’ – had worked as a prop maker before getting a lecturing job at Manchester College teaching jewellery craft.

She had battled depression over the years but her condition worsened after she broke up with a partner, and sought help last September when she was referred for more intensive treatment.

But she was discharged from continued mental health services on February 24, although she remained on a long waiting list and was prescribed medication.

Her mother Valerie, 73, told the hearing: ‘She was a very popular and gifted teacher. She would sometimes ring up and say “I’m lonely, mum”, even though she was a people person.

‘Over the last seven or eight years she had a number of difficulties in relation to depression. She separated from a relationship in August 2013. 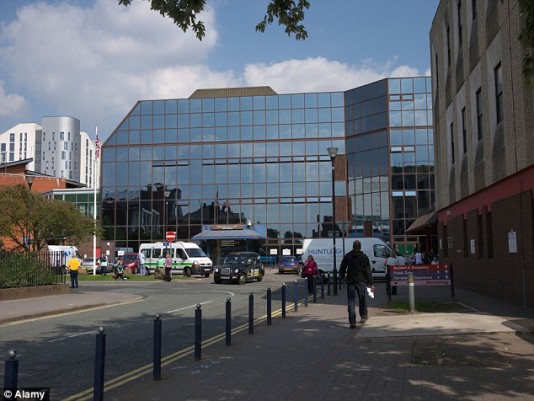 Treatment: Despite being referred three times for urgent treatment due to concerns about her mental health, the vicar’s daughter was sent home by a psychiatric nurse at Manchester Royal Infirmary (pictured)

‘She found it difficult to go to work. There were things that she was telling me on the phone for the first time, expressing thoughts she didn’t want to live anymore.’

By January, Miss Golton had become so suicidal she went to A&E and was admitted to hospital at her own request.

Mrs Golton added: ‘I understand she was told that cognitive behavioural therapy might help her but there was a five month waiting list. By February 22 I already had the impression she just wanted to emotionally distance herself in case we got in her way.’

During a two-week holiday to Marrakech, Morocco, in March this year, Miss Golton, had what she later described as a ‘meltdown’ and emailed her mother saying she wished to end her life.

In the email she talked of having ‘lost in ego’ syndrome and was very quickly going to go downhill and ‘become a vegetable’.

A tour guide later phoned Mrs Golton to say her daughter had been admitted to a psychiatric unit and Mrs Golton immediately booked a flight to the African country and brought her home.

Mrs Golton added: ‘We got back to the UK and took her to A&E. she was calm but distant. She wanted me to promise to take her to Switzerland for euthanasia.

‘She was talking about not wanting to live anymore. She was asked by one doctor in A&E, “if you really wanted to commit suicide, how would you do it?”

‘She just grinned and said “I’m not telling you”. I got the impression she couldn’t cope with having to wait and continue in the mental mess she was in any longer.’

Miss Golton became ‘angry’ when she was told to go home at around 3.30am on April 6, but a meeting was made for the crisis team to visit her address at noon that day.

But at about 10.30am Miss Golton was seen in her vehicle in the car park at the former cotton mill.

Difficult time: During a two-week holiday to Marrakech (file picture), Morocco, in March this year, Miss Golton, had what she later described as a ‘meltdown’ and emailed her mother saying she wished to end her life

Other members of her church group due to attend a meeting went inside only to find Miss Golton lying fatally injured. She left a letter apologising to family and friends including her local pastor.

Psychiatric nurse Denise Hardy, a senior mental health practitioner at Manchester Royal Infirmary, was the last medical professional to see Miss Golton when she was admitted to A&E.

She said: ‘She told me she had thoughts she might throw herself off a bridge or building and she described having had a meltdown in Marrakech.

‘She said she was schizophrenic or had dementia and we had a discussion and I felt she was exhausted. I didn’t know whether to admit her. I wanted her to be with people who cared for her and understood her. It was a difficult assessment.

‘A lot of symptoms were of exhaustion and sleep deprivation. She described being de-personalised and having conversations in her head and if I mentioned Marrakech she got very anxious and distressed and angry.

‘She said she would grow old with dementia. Like she could see further than tomorrow. I felt exhaustion was clouding the clinical picture.’

‘I contacted the specialist registrar for his opinion but I felt her risk of self-harm was low at the time. If she hadn’t have had the support from mum I think my decision to send her home would have been altered.

‘She was quite angry. I felt like she was keeping it supressed but I got the impression she didn’t know what she wanted. She got angry when I said I didn’t think she was schizophrenic.’

Following the tragedy a report by Dr Judith Harrison of the Manchester Mental Health and Social Care Trust said there were concerns about access to therapy and long waiting lists.

‘Long waiting lists are unsatisfactory but they are generally the same across the country,’ she said. ‘Waiting lists should be prioritised differently. If there is a waiting list for six to nine months I would agree there needs to be more of those services.’

Reaching a conclusion of suicide, Coroner Joanne Kearsley said she would be writing to the appropriate health body to discuss the levels of care available in ‘crisis teams’ and also to waiting times involved in mental health care.

Miss Kearsley added: ‘Members of the family spoke about her recurring depression. There seems no doubt that that had intensified and I heard of the involvement of the GP and mental health services.

‘There was inpatient admission and involvement with the crisis team. It appears there’s no dispute that she needed longer-term therapy and assistance.

‘While referrals have been made I have heard evidence around difficulties in accessing and waiting lists she was subject to. It is not simply a problem for Manchester alone.

‘I heard from Denise Hardy of her assessment in A&E. I am grateful for her honest evidence and the difficulties she had in assessing and I fully accept we now have the benefit of hindsight and what tragically occurred.

‘I want to offer my condolences to her family and friends. The deterioration in mental health in those six months must have been difficult for all of you.’

For confidential support call the Samaritans in the UK on 08457 90 90 90, visit a local Samaritans branch or click here for details