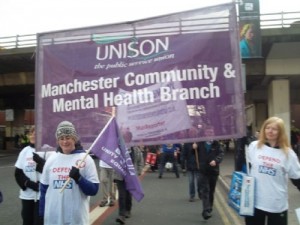 This will be followed by a week of action short of strike action between Tuesday 25 and Sunday 30November when members will work to rule and not do any unpaid overtime.

A recent Income Data Services (IDS) survey for NHS trade unions revealed that increased workload, low pay, constant restructures and the stresses of the job are among the reasons why two thirds (66%) of NHS workers have considered quitting.

Christina McAnea, UNISON head of health and chair of the NHS staff side trade unions, said:

“For many in the NHS, last month’s strike was a first. The next industrial action will be bigger as more unions will be joining it. Jeremy Hunt needs to listen to NHS workers who feel this Government is treating them with contempt.

“NHS workers are overworked and underpaid. Most patients would be shocked to know that one in five of the NHS workers who care for them need to do a second job just to survive and many have to borrow money every month to make ends meet or resort to foodbanks.”

The IDS survey of nearly 30,000 union members working in the NHS, including cleaners, radiographers, nurses and senior managers, revealed howworkers are feeling the strain as more than a third of respondents work unpaid overtime.

This was confirmed by four in five of the managers during in-depth interviews. Around half of managers feel unpaid overtime is causing problems with morale, motivation, fatigue and ‘burning out’.

The research also shows a growing number (62%) have to rely on extraearnings compared to 54% in 2012.

“Low morale is endemic. And this is echoed by a King’s Fund report out today which shows staff morale is now one of NHS finance directors’ top three concerns. Twice as many from the previous quarter.”

NHS workers took strike action over pay for the first time in 32 years on Monday 13 October. This was followed by a week of action short of strikeaction when members took their meal and rest breaks.