MORE than half of the schools in England are unable to provide proper mental health support for troubled pupils, according to a damning report. 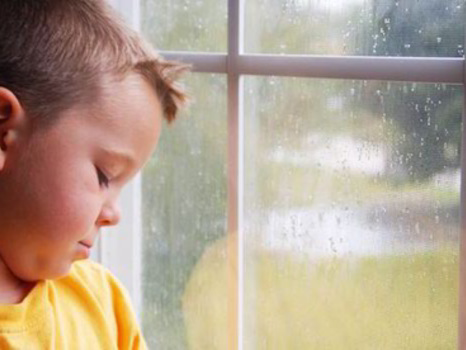 Children with mental health issues are being let down

Alarmingly, the commission found that fewer head teachers at specialist pupil referral units and special educational needs schools (37 and 43 per cent respectively) had confidence in mental health services for the young.

Commenting on the report last night MP Paul Burstow, who is chairman of the CentreForum Mental Health Commission, said: “With three children in every classroom experiencing mental health problems, teachers need the right training and support to identify issues early and to ensure that children and young people get the help they need to recover and thrive.

“The results of this survey suggest schools and young people are often let down and left to fend for themselves.

“With a price tag of up to £60,000 per child, per year the lifelong impact of mental illness on young people and their families is something we can’t afford to ignore.”

Professor Dame Sue Bailey, chairwoman of the Children and Young People’s Mental Health Coalition, said: “The gaps and concerns this report so clearly identifies reinforce the need to provide young people with the help, support and self-empowerment to develop and maintain resilience to stay mentally healthy in order to achieve to their full potential.”

The survey is the first of its kind and follows a 12-month review by the commission on the state of mental health in England.

Since the commission published its final report in July, Prime Minister David Cameron has promised to “look carefully” at CentreForum’s recommendations.

The Government has also established a task force to examine child and adolescent mental health.

Deputy Prime Minister Nick Clegg MP, who has pledged to adopt the commission’s recommendations next year, said: “Schools would never ignore a child with a physical health problem, so the same should be true of mental health too.

“Early intervention is crucial in tackling mental health problems, which is why school leaders have a major role to play.”

MP Norman Lamb, the Care and Support Minister, said: “I am committed to improving mentalhealth care for children and young people, that’s why I’ve formed a task force to advise on improvements.

“Crucially, members include experts from the education sector and we’re engaging young people directly to get their views.

“We’ve also invested £3million in MindEd, a website to help anyone working with children – from teachers to dinner ladies and sports coaches to Scouts leaders – to make sure children get the mental health support they need.”

Remember Leaving Your Comments Can Help Others to Understand Their Illness better . Comment is free !