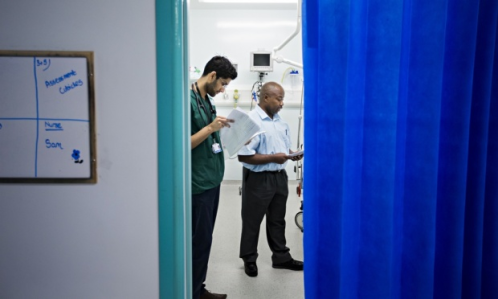 Members of a mental health team talk to a patient in A&E at Heartlands hospital in Birmingham. Photograph: Andrew Fox

“This is a system at breaking point, and patients are being put at serious risk as a result. The college’s position is very clear – everyone who requires an acute mental health bed should be able to access one in their local NHS trust area.”

A psychiatrist who did not wish to be named told the Guardian that there were only five acute beds available to mental health patients in the week ending 30 January. NHS England did not respond to the Guardian’s request to verify this statistic.

An investigation by Community Care magazine and the BBC last year found that more than 2,100 mental health beds have closed since April 2011, amounting to a 12% decline in the total number available. It also found that seven people had killed themselves since 2012 after being told there were no hospital beds for them.

In November, there was an outcry when it emerged that a 16-year-old girl had been held in police custody because there were no hospital beds available. The following month the government said it would end the practice of mentally ill teenagers being detained in cells and ensure that police custody would only be used as a place of safety for adults when their behaviour is so extreme they cannot be managed elsewhere.

Last month, the state-funded “consumer champion”, Healthwatch England, warned that the safety of vulnerable people is being put at risk because they are discharged from hospital without proper information about their condition and future needs. It found cases where people who had previously engaged in self-harming and suicidal behaviour, and had usually been admitted to hospital for this reason, were offered only a crisis support phone number on leaving.

Marjorie Wallace, chief executive of mental health charity Sane, said it was “profoundly worrying” that there were days when no NHS beds are available. She said: “It is a cruel result of a longstanding agenda to reduce mental health beds and treat all mental health patients – no matter how unwell – by already overstretched mental health teams in the community.”

She highlighted research published in Lancet Psychiatry last year which showed that suicides on psychiatric wards have more than halved in recent years, whereas they have more than doubled among mental health patients treated at home by crisis resolution home treatment teams.

Care and support minister Norman Lamb said the government had invested £120m to improve care. “We are pleased that NHS England’s guidance to commissioners for 2015/16 is to give real terms funding increases to mental health,” he said.

“I have set about getting data for the first time ever on out of area placements so that we can see clearly which areas are failing. I am clear that sending people a long way from home is intolerable. I have asked Monitor and the Trust Development Authority to identify the problem areas and find solutions to these failures.”