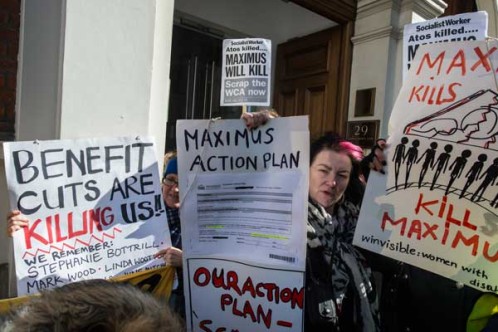 Activists joined protests against government contractor Maximus at the start of this month (Pic: Guy Smallman)

I’m waiting for a letter, and it’s terrifying. Like thousands of other people hit by the bedroom tax and other benefit cuts, I rely on a discretionary housing payment (DHP) from the council.

But these are all up for renewal in April—and the government has slashed the total amount by £40 million.

Some councils will be paying less than half as much. We’ve heard nothing from Leeds council, but the letters will go out this month. This is the same council that has just passed yet another austerity budget, slashing services.

Many of us already have a fight on our hands against ill health, and this only brings more stress and worry.

We’ve already seen people having their DHP removed when their benefits are stopped, or “sanctioned”.

We’re set to protest against sanctions on Thursday of this week, as part of a national day of action called by the Unite Community union and the National Benefit Justice Federation.

We’re expecting a big and lively protest at Briggate Job Centre in Leeds and hope PCS union members there will join us. I’ll be there as a campaigner, and as the Trade Unionist and Socialist Coalition (TUSC) candidate for Central Leeds in the general election.

The local campaign Hands Off Our Homes has put together some really good display boards about what’s going on. We’re reminding the public about the cruel effects of the bedroom tax and benefit sanctions.

We want to scrap the work capability assessments that test whether sick and disabled claimants of Employment Support Allowance are “fit for work”. They were wrong when Atos did them. And they’re wrong now they’re being restarted by Maximus—a firm already mired in controversy over its handling of welfare contracts in Australia.

We’re also raising awareness for the anti-racist protests this Saturday. Migrants’ rights are affected whenever they try to claim benefits—from language difficulties to calls for discrimination.

And we can see clearly on the streets that there’s a growing number of homeless people—that’s unacceptable in one of world’s wealthiest countries.

Sanctions leave people with no money. And the whole system is getting mixed up by Tory Iain Duncan Smith’s big lie that is Universal Credit. It means every household gets one payment that doesn’t take account of circumstances.

If they care for a disabled child or if they are victims of domestic violence, they won’t get what they’re entitled to without getting extra forms and filling them in.

People don’t know what to do—and not a single Labour councillor in Leeds has lifted a finger to help them. They come to us instead.