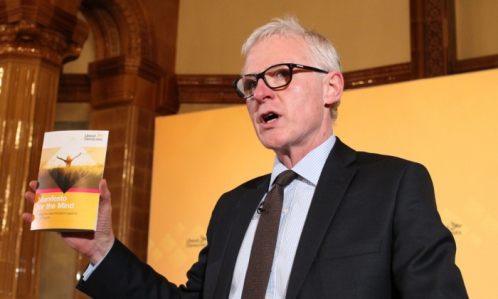 The Liberal Democrat care minister, Norman Lamb, has accused mental health campaigners in his North Norfolk constituency of trolling him on Twitter.

Lamb, who promotes himself as a champion for mental health awareness, was responding to tweets from the Campaign to Save Mental Health Services in Norfolk & Suffolk which called him duplicitous and said it had encountered many people who were adversely affected by cuts to mental health services under the Liberal-Conservative coalition.

The MP for Norfolk North tweeted: “I am pursued by vicious, sometimes defamatory and totally cynical trolling by Norfolk/Suffolk Crisis campaigners!”

Terence O’Shea, a spokesperson for the group, described Lamb’s tweet as “dismissive and insulting”, saying that the campaign was made up of former mental health care workers, bereaved families and service users.

O’Shea said Lamb had called the group “mental health extremists” at a meeting in Saxmundham in January that was organised by James Sandbach, the Liberal Democrat candidate for Suffolk Coastal.

Lamb denied this but stuck by his claim that the group had trolled him on Twitter.

The campaign has directed tweets at Lamb with pictures of a joint of roast lamb, referring to “operation lamb chop” and using biblical quotes warning that the MP is a wolf in lamb’s clothing.

The Lib Dem minister, whose brief includes mental health, said that given his own family’s experience of mental health problems, he was on a mission “to end the discrimination against mental health in the NHS”.

“We have made good progress in this parliament – changing the law so that mental health is treated equally in the NHS, investing hundreds of millions in talking therapies and eating disorder care, and introducing the first ever waiting time standards.

“But I am under no illusion that there is still a long journey ahead. That’s why the Liberal Democrats are committed to investing £3.5bn over the next parliament to get better mental health care for everyone.”

The Lib Dems have included a pledge to give mental health parity of esteem with physical health on the first page of their election manifesto, a place reserved for policies they are determined to implement if the party returns to government.

In February, the Norfolk and Suffolk NHS Foundation Trust became the first trust specialising in mental health to go into special measures. Campaigners have said community care for the most vulnerable in the region has been decimated, specialist outreach teams that provided support for the severely mentally ill had been closed, and more than 120 beds in the two counties had been lost.

In March, researchers from BBC News and Community Care compared the budgets of mental health trusts in England in 2010-11 with 2014-15, and their findings suggested they had suffered a real-terms budget cut of around 8.25%, or £598m. The research suggested referrals to community mental health teams, which help people avoid being admitted to hospital, had risen nearly 18.5%.

O’Shea said: “Mental health nurses and psychiatrists and social workers – they’re not really nasty people. [Lamb] said that we told the most outrageous lies and said he was slandered or libelled on Twitter on an almost daily basis.

“When you actually look at what we say, other than calling him duplicitous, which I would have thought would be a compliment to most politicians, I think we’re actually pretty polite. I don’t think we troll Norman Lamb. He’s a big boy.”

O’Shea said Lamb had never been to any of the group’s meetings or tried to engage with its members. “He just wants to pretend that we’re not there. He wants to dismiss us offhand.

“What he says [about the difficulties facing mental health services in the area] is ‘this is totally unacceptable’ and he says it as if he is not the minister of state in charge of mental health. And what we say to him is that there needs to be less campaigning and more doing. He’s the person in charge. And he doesn’t like that.”