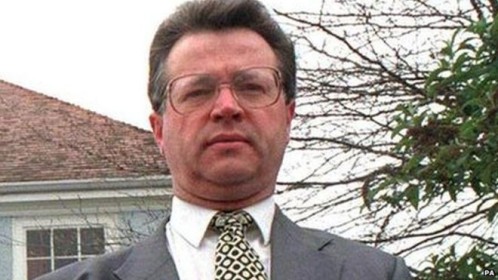 Hall sold stories about Robert Ashman, who attacked an MP and killed his assistant in 2000

Kenneth Hall, 49, from Bridgwater, Somerset, sold details about killers held at the hospital to the News Of The World and Mirror newspapers.

They included Robert Ashman, who attacked MP Nigel Jones and killed his assistant with a samurai sword in 2000.

Hall pleaded guilty to misconduct in public office at the Old Bailey and will be sentenced next month.

Hall’s wife Karen, who was also a nurse at Broadmoor, pleaded guilty to aiding and abetting the commissioning of the offence by allowing money she knew her husband was getting by selling stories to go into her account.

The mother-of-three did not sell any stories or disclose any confidential information herself, and was sentenced to five months in jail suspended for one year on Tuesday.

The Old Bailey heard how Hall made thousands of pounds selling stories to a freelance reporter, Anna Gekoski, who often worked for the News Of The World.

He later also made contact with a reporter at the Mirror.

Prosecutor Stuart Biggs said Hall “was both providing care and treatment to patients with mental health illnesses and personality disorders” when he sold the stories. 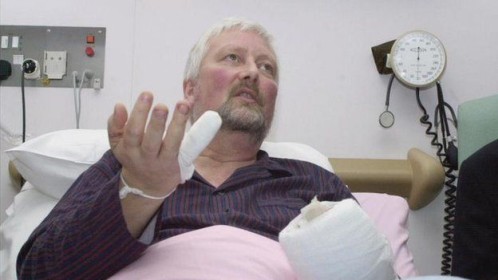 “And so he had responsibilities in respect of the risk they posed to each other, themselves and the community.”

The court heard that Hall smuggled out patient notes relating to Ashman, leading to a number of stories, including one headlined, “Samurai Nut Could Be Free In 18 Months”.

Mr Biggs said Hall also forged notes when he could not smuggle the originals out of the hospital.

In an email to Ms Gekoski, from 19 September 2003, Hall wrote: “Hope it goes in as a lot of work went into getting copies of those.”

But the prosecutor said: “Many of the contents are fabricated. There is sometimes some truth, and sometimes there is more truth, but there is at least exaggeration.

“In this case it’s a complete fabrication.”

“He had the credibility of the newspaper to create false documents, and he, on the rare occasions he was able, took out of the hospital a true document, with obvious sensitive and confidential information.”

Sentencing Mrs Hall, who suffers from poor mental health and walks with a stick, Judge Timothy Pontius said it was a “tragedy” to see her in court.

But he said that in knowing her husband was making money by selling confidential information, she had encouraged the offending.

The judge told Hall, meanwhile, that a prison sentence “must be uppermost in the court’s mind”.

He was bailed to return to the Old Bailey for sentencing on 26 June.