Boxing champ, who has been treated for bipolar disorder, wants a sit down with David Cameron 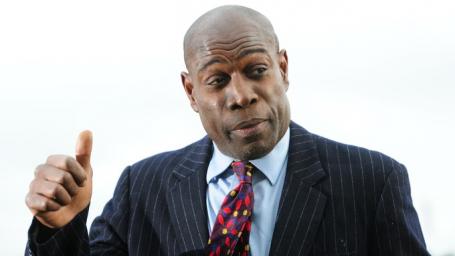 The 54-year-old, who appeared on Good Morning Britain this morning (Dec 2) criticised Cameron for the failure of the NHS.

“They treated me very, very, very bad. They made me feel like an ant,” he told the show’s hosts Piers Morgan and Susanna Reid about his own treatment.

He added: “I’m sorry for the other patients and what they’re going through so I’m flying the flag for the government to stop giving money away to different countries and invest the money in your own country.”

Bruno, who has been treated for bipolar disorder twice in hospital, was critical of Cameron who he accused of being more interested in foreign affairs than he did of domestic matters.

“Look after Britain and make Britain the best country in the world,” he said.

Referring to his own personal struggle, the father of four shared that some days were easier than others.

“Some days, you’ll get up and the sun shines, some days it’s raining. We all have different problems – bills to pay, relationships break up, kids to look after from a different marriage so it’s not only me what goes through it.”

But Bruno insisted he was now “110 per cent happy”.

Twitter users were quick to praise Bruno for his honesty with applauding his bravery.

Steph Beele wrote: “Frank Bruno was amazing, so grounded, good to hear someone talking so much sense for a change.”

Julie Anne Taylor wrote in agreement of Bruno’s criticism of Cameron: “Well proud of Frank Bruno and his interview on #GMB stop giving money to other countries and invest in our mental health services.”