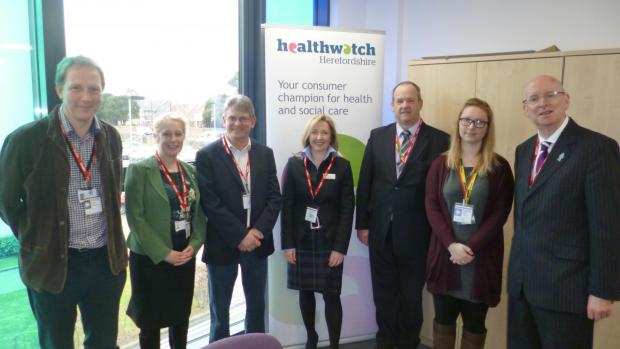 MENTAL health professionals emphasised the importance of people looking after their own wellbeing at a public question time in Hereford.

Six medical professionals who work in mental health for the county answered questions at a Healthwatch Herefordshire event at Hereford’s Sixth Form College.

They said they believed there was less of a stigma associated with mental health but emphasised that more money is needed to help move NHS mental health services forward.

Someone asked for advice for students who may be worried about talking to their GP and about whether it would show up on their record for future jobs.

Dr Lenanne said: “I did a morning surgery- 25 patient contacts – ten were predominantly about mental health. It is one of the biggest areas all GPs deal with.

“People do get worried about confidentiality but it really is the lifeblood of medicine. I can’t tell anyone anything about you without your consent.”

Someone asked where a child who lived in Herefordshire would be taken if they needed to be hospitalised for mental health reasons?

Dr Fear, medical director for 2Gether NHS Foundation Trust, said it is a rare occurrence for someone under 18 and last year ten young people from the county were admitted to psychiatric hospitals last year.

He said there are no beds closer than Birmingham.

Dr Fear added: “I think I would accept and I would say any distance is really too far to go. However, the amount of admissions that we have there is no sufficient demand to develop the highly specialised services required to deal with people at that level.”

Richard Kelly, executive director at Herefordshire Mind, said there is a lack of funding available for children’s mental health and there needs to be more money invested for preventative services.

He added that although people are well versed on looking after their physical health, they also need to look after their mental wellbeing.

The NHS has published five steps to wellbeing which are: connect with other people, give your time, take notice of the present, keep learning, and be active. For more details go to www.2gether.nhs.uk.