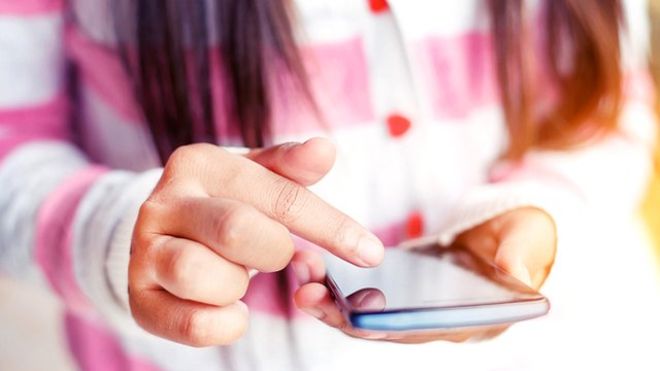 The mental well-being of teenage girls in England has worsened in recent years, says research for the Department for Education.

Researchers highlighted the growing pressure of social media and the near-constant use of mobile phones.

The study compared the experiences and attitudes of 14-year-olds in 2014 with those in 2005 and found an increase in “psychological distress”.

“Young people felt less control over their own destinies,” says the study.

On the positive side, it saw young people more engaged in school, more likely to want to go to university and less likely to be involved in “risky” activities, such as smoking or getting involved in petty crime.

But there was also a negative dimension, with an increase in psychological problems, particularly among girls.

There were also more problems for those growing up in single-parent families.

Researchers suggested that the sense of seriousness and the need to do well at school could reflect the changing economic climate.

Teenagers in 2005 had grown up in a time of sustained economic growth – while those in 2014 were aware of the tough competition for jobs and the difficulty in affording somewhere to live.

The result seems to have been to make young people more “work focused”, says the survey.

And rather than any stereotype of “binge-drinking, drug-taking and laziness”, it suggests that young people are more likely to be characterised by increased levels of anxiety and a sense of being under pressure.

The study also linked an increase in psychological problems with changing technology.

The dominance of social media and the widespread access to the internet on mobile phones represents a “major change in the lives of young people”, says the study.

Teenagers in 2014, unlike those in 2005, faced the almost constant pressure of social media and the use of smartphones with video cameras.

This played a part in everything from bullying to missed hours of sleep and to pressure on friendships and relationships.

The study found teenagers from better-off families were more likely to suffer from “psychological distress” than those from poorer families.

Researchers suggest this might reflect a lower sense of parental pressure.

The study suggests that the problems of mental health are so widespread that “broad-spectrum initiatives aimed at all young people” would be valuable.

“In terms of the policy implications of these findings, it would appear that there is little in the way of low-hanging fruit – simple, low-cost initiatives are difficult to identify,” the study says.