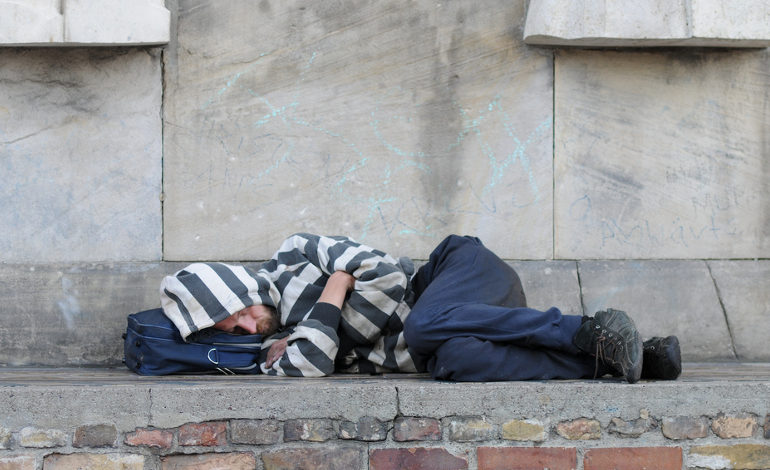 Walking around the city streets of the UK, it is impossible to miss the growing levels of homelessness. Ever more homeless people appear, asking for change or sheltering in doorways: asleep, unconscious or worse? It’s hard for passers-by to tell, and few are willing to check.

It is often the most vulnerable in our communities, those that most deserve our protection, that end up suffering the brutalities of homelessness: poverty, insecurity, violence, substance abuse, fear, stigma, ill health and an early death.

Since 2010, the number of rough sleepers in England has doubled. It now stands at3,569 people.

In Manchester, the annual rough sleepers headcount came to eight in 2010, by 2015 this had risen to 74, a greater than 9-fold increase. But the method of counting by all local authorities in England, on one night in specific hotspot areas, is flawed. It is widely criticised even by members of Manchester City Council and thought to severely undercount the problem.

And rough sleepers are just the tip of the iceberg. There has also been an increase in those classed as statutory homeless (who have met criteria set by a local authority). As well as the hidden homeless  who have not registered with any authority.

Reasons behind the increases are the steep rise in rents linked to insecure tenancies, which are compounded by stagnant wages in increasingly insecure jobs. The right to buy social housing has also severely depleted the stock of affordable housing, with little being done to replace it.

The situation is exacerbated by the UK government’s austerity agenda, which is forcing national and local authorities to make severe cuts to essential services. In 2015 Manchester City Council passed funding cuts to Housing Related Support and the Homelessness Prevention Grant of just over £2 million.

However, cuts like these are a cruel and false economy. As well as the increase in human suffering caused, there is an increasing body of evidence to show that it costs the state more for homeless people to be on the streets than for them to be housed.

The cost of homelessness

A UK government report described the difficult nature of calculating an exact figure for the costs of homelessness and reviewed the best attempts at doing so over the last ten years. One of these reports estimated that, in the UK, £1 billion a year is spent on offering services to homeless people or preventing homelessness occurring.

A recent report by the homeless charity Crisis called At What Cost estimated that the cost, to the UK taxpayer, of a single person being homeless for 12 months ranged between £3,000 and £19,000 per person. The calculations were based on real examples from homeless people, and included figures for staying in hostels, criminal justice costs and amounts accruing due to visits to A&E and other medical costs.

But there is another way

Housing First (HF) is a social policy undergoing a trial in Manchester to see if it can reduce homelessness and provide evidence of the economic gains of doing so. The policy was created in New York. Psychologist Dr Sam Tsemberis wanted  to find a way of preventing people with mental health problems from becoming chronically homeless. In the US it has proven more effective than conventional measures in reducing homelessness. While also reducing the overall cost to the taxpayer.

Sarah Walters is the Development Manager for Inspiring Change Manchester. It’s an initiative led by the homeless charity Shelter. She is leading the HF evaluated pilot that started in April 2016, but has been using HF principles to house 15 people before the pilot started. Walters thinks one of the main reasons for the success of HF is:

What housing first does is separate those two things out. You [Housing First client] have got your own tenancy, this is your tenancy, you will only lose your tenancy the same way we would lose our tenancies, if we don’t pay our rent, if we trash the place completely or if we upset the neighbours.

Those being placed on the trial will have different needs for support, which are provided for by a comprehensive service team with the main point of contact for the one service user being a key housing officer.

The striking improvement in behaviour, when someone is taken onto a Housing First program, can be seen in this case study given by Walters:

Since he has been housed in his own property, absolutely nothing, no involvement whatsoever with the criminal justice system. Because he is not on the street and in a position where he gets involved with things he shouldn’t

Dylan Stratton was homeless himself for around ten years and so is fully aware of the importance of secure accommodation when dealing with any underlying issues. During his time on the streets, he had health, substance abuse and behavioural issues leading to countless visits to A&E and many run-ins with the law. Some of those resulted in prison sentences. Stratton says:

I was a frequent flyer to Manchester Royal Infirmary, because of some issues I have got with epilepsy a few other bits and bobs and breakages. I was that frequent you might think I had shares in the place, to tell you the truth, but I was flagged up as problematic. Since coming through the services I went through detox in prison. I came out and because I didn’t fit the criteria for rehabs, I was back onto the streets.

During that time he thought of himself as a “homeless, drunken, junkie bum…”. Stratton reveals, “I just felt like a ghost”. Since turning his life around, he has been clean of drugs and sober for over three years. He has also been living in his own private rented home for coming up to three years. His stable accommodation now lets him put his experience on the streets to good use as a Core Group Volunteer with Inspiring Change.

I think the most positive side of having my own property is I haven’t actually stayed in A&E for over three years, I have had no issue over going to A&E for whatever reason.

But the road he has travelled to get where he is now has been a rocky one. The first tenancy he was offered while homeless did not go to plan, according to Stratton:

I was placed through the council into a council property, but I brought the streets with me, that mentality, because their wasn’t that wrap around service provided that Housing First is offering… So I was still in deep shit, with no support to access services to address that.

Housing First projects are becoming popular in countries around the world, including Australia, Canada, Finland and France. Wherever it is tried there are positive results emerging to support its use and versatility in being able to cope with differences in: culture, housing stock, health care provision and levels of social security.

Studies carried out in the US, by the US Department of Housing and Urban Development, Pathways to Housing, and the Seattle authorities have shown that HF projects can reduce homelessness and save the state money at the same time. These examples, and many others, have led to HF being adopted successfully in many areas across the US.

Can it work in the UK?

The trial in Manchester, is looking to house around 15 people a year, but they are keen to roll it out to larger numbers if successful. Walters is optimistic about the pilot’s chances of success, saying:

Its the success rate that really appeals to people. So using an approach which takes people through a series of different types of temporary accommodation… That stepped approach has about a 40% success rate in terms of tenancy sustainment. Whereas in the Housing First approach… the success rate is around 80-90%.

Nicholas Pleace is a housing expert involved with the Manchester HF pilot who published a report called Housing First in England. The report evaluated nine HF schemes and estimates that the potential overall savings to public expenditure could be in excess of £15,000 per person per year, if Housing First schemes are used.

While not being a solution to all homelessness, as Walters was keen to point out, it can produce good results in a subset of individuals suffering from chronic homelessness due to complex needs.

Pleace reported that the HF services he examined in England were often in a precarious position, due to short-term and insecure funding.

Public money spent on preventing homelessness needs to be seen as an investment, not a cost. It allows the most vulnerable section of our society to regain their lives and go on to become active members of society – leaving society richer in both an economic and humanitarian sense.

– Read more from The Canary on the subject of homelessness  and the housing crisis.

– Support the life-saving work Shelter is doing on homelessness and other housing issues.

– Contact your local MP and ask them to support the Homelessness Prevention Bill, which gets its second reading in parliament on Friday the 28th of October 2016.