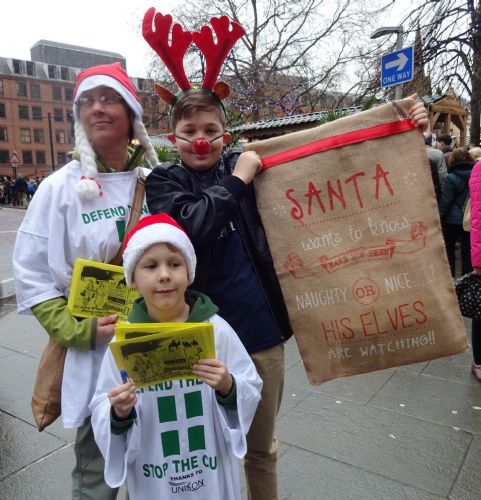 This afternoon the bells rang out for the NHS at Christmas, as campaigners dressed in festive attire urged shoppers at the Albert Square Christmas Market to Defend The NHS and Stop the Cuts.

A people’s choir from Save Bolton NHS, Keep Our NHS Public and a variety of trades councils, unions and pensioner groups sang festive songs with the lyrics suitably changed to be aimed at Government NHS axe man and privatisation supremo, Jeremy Hunt, and local politicians like Richard Leese who are implementing £2billion worth of health cuts in Greater Manchester…

“A £2billion cut in a £6billion budget is just unacceptable, it means the end of the health service, ” said rally organiser Karen Reissmann, adding that five wards are closing at Bolton Hospital, including maternity; that one thousand beds will be lost and surgical wards will close in most areas across Greater Manchester.

“We are outraged that Jeremy Hunt and the Government refuse to acknowledge the crisis that the NHS is in because of the £22billion that they have cut from it nationally” she added “Health trusts up and down the country are now proposing even more bed cuts in a country that has the third lowest number of beds in the whole European Union.”

At the rally, there were posters showing where Britain stands in the EU. Germany has 8.6 beds per thousand populations, France has 6.2, the European average is 5.2 – and the UK has 2.8.

“Only Poland and Romania have fewer beds than us, while some of the poorest countries like Estonia, Greece and Spain have more” Karen explained “We also have the second lowest number of MRI scanners and the third lowest number of CT scanners. Our health service is a mess and people are dying, and they’re proposing, even more, cuts.

“So we’re saying to Jeremy Hunt `We’re not having it, we’re not letting you get away with it’” she added, “We’ve got Christmas cards with No Room at the Hospital showing people being turned away, like Mary and Joseph being turned away from the inn.”

Shoppers were being asked to sign the cards, which had `A Sorry Winter’s Tale’ inside with a story of how Jeremy Hunt might be treated when he is 84.

On the back of the card people had a choice of who to send it to – Jeremy Hunt himself, Richard Leese or any other of the ten Greater Manchester council leaders, including Salford City Mayor, Paul Dennett, who, by his name had a little memo that “50% requests for social care turned down“.

“As well as Jeremy Hunt, this is also a message to every single leader of a council, who doesn’t have to agree to the one thousand bed cuts” Karen explained “People can send the card to them to ask `Why are you agreeing to these Tory cuts, why are you not blocking them at council level?’”

The cards were collected by kids carrying a sack stating `Santa wants to know – have you been naughty or nice? His elves are watching…‘. The NHS `naughty book’ is going to be well full this year…

Mark Bem, from Salford, was one of those getting people to sign the cards… “I work for the NHS and I’m seeing year on year how it’s this constant underfunding,” he said “It’s creating what I can only see as a way for people who want to make money to privatise health care. So I’m here to protest and say `This has got to stop, it can’t carry on…‘”

Jingle bells, Jingle bells
Jingle all the way
It’s no fun when you are sick
And you have got to pay.

The Christie Facing £7.5m Cuts as Cancer Patient Made To Wait For Bed – click here

The Salford Star has more `state-of-the-NHS’ articles to follow. 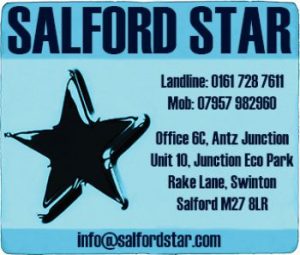 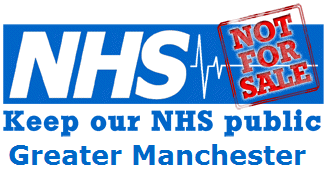 “Keeping the Service Users in Mind”