Rosie O'Donnell called Trump 'mentally unstable' in a tweet on Sunday She also warned America that there are 'less than 3 weeks to stop him' The comedian is known for retweeting quotes against the leadership of Trump In November she came under fire for suggesting Barron Trump, 10, was autistic O'Donnell issued apology to Melania Trump for the comments against her son Trump-O'Donnell feud is one that dates to 2006 when she was host on

Comedian Rosie O’Donnell called Donald Trump ‘mentally unstable’ in a tweet on Sunday and warned America that they are running out of time to stop him.

‘Donald Trump is mentally unstable,’ O’Donnell wrote on Twitter while sharing a link to a CNN article.

O’Donnell, who constantly retweets quotes against the leadership of Trump, added that there are ‘less than 3 weeks to stop him America’. 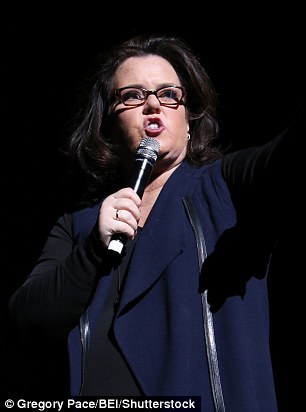 O’Donnell, who constantly retweets quotes against the leadership of Trump, added that there are ‘less than 3 weeks to stop him America’

The article O’Donnell shared was about author Harry Hurt III, who wrote Lost Tycoon: The Many Lives of Donald J. Trump.

Hurt told CNN that he was asked to leave the Trump International Golf Club in West Palm Beach after introducing himself to the president-elect, who was at the practice range on Friday.

Hurt said Trump’s behavior was ‘inappropriate’ after he claimed in a Facebook post that he received a ‘tongue lashing from the President-elect’ on Saturday.

O’Donnell’s recent comments on Twitter were in response to the incident between Hurt and Trump.

The O’Donnell-Trump feud, which has been on and off for the past 10 years, was resurrected during the first presidential debate, as O’Donnell declared her support for Democratic candidate Hillary Clinton.

Throughout his campaign for the White House, O’Donnell regularly took swipes at the president-elect.

The 70-year-old has labeled her a ‘fat pig’, ‘slob’ and ‘total degenerate’ over the years and even brought her up in the presidential debates.

When Clinton accused Trump of sexism during the debate at Hofstra University, in New York, he took the opportunity to take another jab at O’Donnell.

‘This is a man who has called women pigs, slobs and dogs,’ Clinton said.

Clinton did not mention O’Donnell but Trump responded using her name, implying she was the only woman he’d ever verbally attacked.

‘Somebody who’s been very vicious to me, Rosie O’Donnell – I said very tough things to her. And I think everybody would agree that she deserves it, and nobody feels sorry for her,’ Trump said.

O’Donnell hit back at Trump after the debate calling him an ‘orange anus’.

At the time O’Donnell responded via Twitter saying ‘he will never be President’ before tweeting a link to a clip from The View in 2006 that shows her mocking Trump, a TV moment that is believed to be the origin of their feud.

‘The 5 mins orange anus can’t seem to get over – tell the truth – shame the donald [sic],’ she wrote alongside it.

comments about the former model’s son, Barron, possibly having autism.

O’Donnell tweeted out a video back on November 21 that suggested 10-year-old Barron was autistic, writing: ‘Barron Trump autistic? If so – what an amazing opportunity to bring attention to the AUTISM epidemic.’

Soon after the video, which made a case for Barron having autism by pointing out his behavior was consistent with the condition, began to spread.

To make that point, footage taken mainly from Trump’s election victory speech, was used and showed him yawning, inexpressive and clapping in a way that Rosie agreed was indicative of his autism.

As thousands pointed out to O’Donnell, Barron had been forced to stay up until 3am that particular evening and his behavior was, in fact, more in keeping with a tired schoolboy rather than an autistic one.

After learning of the video Melania shot off a legal letter that name-checked O’Donnell, who responded soon after with her social media apology.

‘I apologize to @MELANIATRUMP – i was insensitive in my RT – i am sorry for the pain i caused – it was not my intent – i am truly sorry,’ wrote O’Donnell on Twitter.

And on December 12, the comedian wrote a powerful poem called One Week about the current state of America.

O’Donnell published the poem on her website detailing her thoughts and emotions in the wake of the election of Trump.

The actress also played a role in encouraging government leaders to investigate Russia’s interference in the US election and just last week President Barack Obama expelled 35 Russian diplomats from America.

Obama labeled the diplomats ‘persona non grata’ and gave them 72 hours to leave the US.