By manchesterusersnetwork on 18th June 20172 Comments

Some years ago I arrange for Prof B. Puri to meet members and civil servants from HM Government, after we all met it was agreed for us all to later meet up. That time is now here and I will be writing along to all who were present at the last meeting. It is now time that Government proves that it should be paying for the prescriptions for those with bi polar who cannot afford the £20:00 a month. There are only two companies in the world that supply 90% EPA no DHA (Docosahexaenoic acid) and the companies E-Mail addresses are as follows Mind1st is at www.mind1st.co.uk and VegEpa Limited at www.Vegepa.com . Please visit these sites and please note to study the sites contents . Should you wish to try using one of these companies products please share your experiences in the comments section below or email the MUN Reporter at manchesterusersnetwork@hotmail.co.uk . You must give at least three month use of taking the oils to benefit from the full effects of 90% EPA (Eicosapentaenoic Acid) with no DHA (Docosahexaenoic Acid).

Share your experience with everyone the story behind both of these companies is wonderful. Soon we shall bring you how it all happened . Our aim is to fight to get 90% EPA with no DHA available on prescription, I believe that day is soon approaching and we here at M.U.N will hale the day that happens.

With the ups and downs that are associated with bipolar disorder (sometimes referenced as Manic Depressive Disorder), it’s understandable that the patient might want to find a solution that can help to keep things more level, instead of having the extreme highs and lows. The patient is wanting to manage their disorder and live a healthy and normal life.  In recent years, the idea of additional medications and natural remedies to handle this diagnosis has been discussed – with surprising answers. 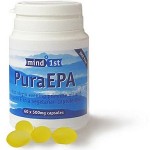 What is Bipolar Disorder?

When the brain is unable to regulate chemical reactions within the brain that affect mood, the patient can experience wide variations in their temperament.  The ‘up’s’ include euphoric feelings, in which the patient is energetic, happy, and feels as though they can accomplish everything and anything. They will often not eat as much, they will sleep little, and they can be very productive.  However, when the brain chemistry changes, the ‘downs’ create depressive states in which the world seems lonely place.  The patient may be sad or angry as well as begin to isolate themselves from the world.  In some ‘downs,’ the patient can begin to have suicidal thoughts along with fatigue, changes in eating habits and crying spells.

What’s hard about bipolar disorder is that there is so little known about the chemistry in the brain that it’s hard to determine how to control these chemicals.  While this condition is not difficult to diagnose anymore, the medication and therapies that are tried can be successful for a time and then stop working as they once did.  This may be due to another shift in the brain’s chemistry or the body simply building up a resistance to the medications themselves.

A lifelong disorder, bipolar disorder can lead to major life disruptions as swings in mood can lead to erratic and harmful behaviours that need to result in hospitalisations.  Once the moods are stabilised again, the patient is free to leave the hospital, but the cycles can repeat again and again.

How is Bipolar Disorder Traditionally Treated?

While the individual cases of bipolar disorder and treatments vary, there are a few common therapies that are used more commonly :-

Talking therapies can be beneficial when used in conjunction with medication therapy, but by itself, this does not address the brain chemistry malfunctions.  Hospitalisation is a fair way to address the change in brain chemistry, but the treatment is only for issues in which the patient is suicidal and harmful to themselves and to others.

What are the Studies Saying?

That said, there are some promising studies that are linking the use of fish oil and success with bipolar disorder patients.  In 1999, a controlled study used fish oil and the placebo of olive oil to see how patients with bipolar disorder responded.  Results showed that moods stabilisation was possible with the use of fish oil, often helping to promote the same cellular reactions as lithium and other medications.

Another statistical analysis of countries that eat diets high in fish and fish oil showed that these countries had much lower rates or mood related disorders.

How to Increase Fish Oil Levels in the Body

The good news is that adding fish oil and essential fatty acids to the diet is a relatively simple process.  With a number of fatty fishes to choose from, it’s simple to add two to three servings of these essential nutrients to your diet each week.  However, with rising pollution counts in the water, scientists are wary of suggesting human consumption of anything more than two to three servings a week. Higher mercury levels in the water can damage the body and cause toxicity in the bloodstream.

Essential fatty acids can also be found in non-fish sources like flaxseed, nuts, and seeds.  Many more food choices are also being fortified with Omega 3 and Omega 6 fatty acids, so it’s easier than ever to add these to the diet.

However, finding the time to prepare fish and to find these products can be difficult.  To help make this step easier, fish oil supplements are also available.  They provide concentrated amounts of essential fatty acids in a convenient form.  In addition, they don’t contain the high levels of mercury.