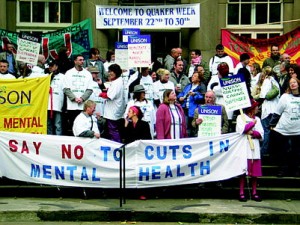 We will be updating the site every day with the latest news from the case, tribunal expected to last all week, read on for full details of the case 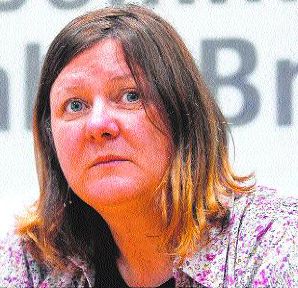 Karen Reissmann, sacked union rep and nurse, finally gets to take her case for unfair dismissal to an Employment Tribunal. It starts on Monday 1st September at Tribunal building, Parsonage Gardens, Manchester. The case is expected to last for the full week.

Supporters will assemble at 8.45am in the Parsonage Gardens, behind Kendals on Deansgate, Manchester, to offer solidarity at the end of a very difficult 18 months for Karen. Colleagues who came out on strike in support of her, users of mental health services in Manchester, other trade unionists and concerned members of the public continue to offer her their full support. They want to be there for her at the start of a difficult day.

Karen was suspended on June 15th 2007 and sacked on November 5th 2007. She was sacked for speaking out about cuts and privatisation of health services. Karen has always been an active trade unionist who has organised campaigns to defend the NHS.

“Karen’s case raises issues about how the NHS is no longer a national cooperative body. Over the last few years it has become increasingly a myriad of different small Trusts competing for business with other Trusts, charities and private health companies.” said Caroline Bedale, UNISON Manchester Community and Mental Health Branch Secretary.

She continued “NHS trusts are not buying and selling cornflakes. We are providing a public service. We want NHS trade unionists to be able to speak out when they have concerns about the impact of the private and voluntary sectors taking over the provision of health services.  We should not be silenced by commercial interests.  It is not good for staff, not good for patients and not good for the NHS.”

Sheila Foley, the chief executive who sacked Karen, resigned from the Trust in July this year. This followed an independent report very critical of the Mental Health Trust in Manchester, which was found to be third from bottom nationally in a recent inspection for in-patient services. However Ms Foley is still expected to come and give evidence in the Tribunal.

Last year UNISON’s national Health Service Group Executive said “UNISON will vigorously defend its member’s right to speak out without fear of persecution and we will ensure that Karen will be supported throughout this process and her interests will be positively defended.”  UNISON is providing Karen with a barrister for the case.

“FOLEY IS EXPECTED BUT HAS NOT BEEN SEEN IN BRITAIN” 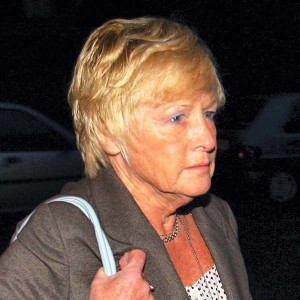 Most are wondering if former CEO Sheila Foley will attend tribunal. The legal complications of her not turning up to give her evidence will make interesting reading for legal experts.