“PRISON CELL’S INSTEAD OF BRAIN CELL’S”

“Watchdog criticises use of police cells for mentally ill” 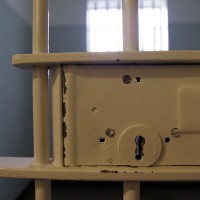 LONDON (Reuters) – The number of people held in police cells rather than hospital for assessment under the Mental Health Act was “intolerable”, a police watchdog said in a report published on Wednesday.

The Independent Police Complaints Commission found that twice as many people were held at police stations under section 136 of the Mental Health Act 1983 in England and Wales than were taken by officers to hospital.

Between 2005 and 2006, an estimated 11,500 people were held in custody compared with about 5,900 in a hospital despite the latter being the preferred choice for safety.

The oldest person held in a police station was aged 89, while four were under 12.

“It is therefore intolerable that even though it has been government policy since 1990 that a hospital is the preferred place of safety for such an assessment our research shows that twice as many people are detained in police custody as in a more fitting hospital environment.

“Police custody is an unsuitable environment for someone with mental illness …..Continued below:

“ILL TREATMENT OF THE MENTALLY ILL”

and may make their condition worse, particularly if they are not dealt with quickly, appropriately and don’t receive the care they need,” he added.

There is concern that the continued use of cells not only diverts police resources from fighting crime, but criminalises behaviour which is not a crime.

“A police cell should only be used when absolutely necessary, for example when someone is violent, and not as a convenience,” Bynoe added.

The report “Police Custody as ’Place of Safety’” is the first time national data has been collated from all 43 police forces.

Under section 136, police officers can detain people believed to have a mental disorder, who are in a public place, for assessment.

Police forces with the lowest rate of detention were Cheshire and Merseyside, while Sussex, Devon and Cornwall reported the highest.

The different rates were put down to the availability of alternative places of safety.

The IPCC made 22 recommendations in its report, sent to chief executives of all primary care and mental health trusts and police chief constables, including new facilities being made available.