Depression The Way It Can Be

You can’t explain to someone who hasn’t been there what it’s like to wake up, and the black curtain of storm clouds have suddenly dropped around you. How do you face the people around you, silently mouthing to each other “again?”. How can you explain that the objectively irrational impulses seem subjectively rational? That you understand that you’re not OK, but there’s nothing you can do to change it, while the world goes on making demands as if you still felt “normal”.

There are two ways things can go from here. Sometimes with a good night’s sleep (or two, or more), and some looking after yourself, things will be OK again, and you’ll pick up your stuff, and keep moving forwards.

Sometimes, things don’t get better. The wiring isn’t just on the fritz, it’s burnt out. If you ask for help, they’ll insist on chemical assistance. They don’t really understand quite why or how the chemicals work, but “they should help”. They might (will) have side effects. The cure might end up being worse than the disease. If that one doesn’t work, they have others. Or a cocktail of medications, each one to deal with the side effects of another. That way lies its own unique madness.

With the meds, they might prescribe talking. Lots of talking, in the vain hope that like the infinite monkeys with their infinite typewriters might turn out some Shakespeare, if you say enough words for long enough, everything might fall into place. Sometimes they’re good at listening, sometimes they’re not. With the right person, it helps.

Fortunately, for me, most days now resemble ordinary. I wake up. I stare at the face in the mirror worn with lines I don’t remember collecting, and stubble that feels like it belongs on someone older than me. I go to work, and try to fit into “normal” like a cheap suit that I bought in a hurry and can’t take back.

But occasionally, there are those days. Days where the mask is tissue-paper thin. Surviving the day is an act of will that leaves a lingering exhaustion that seeps into your bones. Like a drowning man in a flash flood, you wrap yourself around the hope that the waters will recede soon, and you’ll be safe and dry again.

At least until the next deluge.

This is a link to the site  of the author  Warwick Rendell who lives in Melbourne Australia     http://www.warwickrendell.com/2008/09/17/depression-in-my-own-words/ 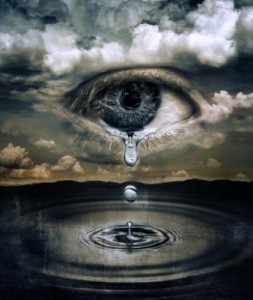