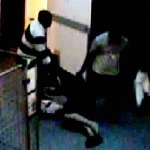 Staff at Edale House mental health unit can be seen on CCTV moving Mr Thompson across the corridor outside Grafton ward where he was a voluntary patient.

A coroner has ruled that the death of a mental health patient who was left slumped drunk in a hospital corridor was ‘wholly preventable’. Peter Thompson, 41, was found lifeless in Manchester’s Edale House after he was left lying on the floor for 10 hours. Nurses at the mental health unit knew Mr Thompson was heavily intoxicated and had wet himself, but left him to sleep it off, an inquest heard. He died from a fatal combination of alcohol and anti-psychotic medication, in the early hours of April 4, last year. Speaking after the inquest Peter’s daughter Carly Thompson said she was disgusted with her father’s treatment. Carly, 23, said: “I didn’t realise the extent of the neglect they had shown to my dad until this week. He went to them for help and they left him out in the corridor to die cold, wet and lonely with nothing.” The inquest jury returned a verdict of ‘death by misadventure contributed to by neglect’. Manchester coroner Nigel Meadows told the inquest: “It seems to me undeniable that the jury came to a conclusion the death was wholly preventable. I concur with that.” Mr Meadows will now write to Manchester Mental Health and Social Care Trust, responsible for Edale House laying out recommendations. He will also inform the Nursing and Midwifery Council calling for investigation into three of the nurses involved. Mr Thompson, a voluntary in-patient with alcohol and drug problems, was stopped from entering his ward after he refused to surrender a bottle of vodka. After staff refused to let him in, Mr Thompson fell asleep in the corridor at around 8.10pm, on April 3 last year. Nurses and managers were forced to step over him to get into the ward. Expert Dr Alan Fletcher concluded that Mr Thompson would have lived had he been taken to an Accident and Emergency during the night. When a night manager went to see him at around 6.15am the next morning, he was “cold and unresponsive”. Paramedics and police were called, and Mr Thompson was declared dead at 6.43am. A pathologist report concluded he died from fatal levels of alcohol and anti-psychotic drugs, with liver cirrhosis as a contributing factor. Mr Thompson, an unemployed dad who previously lived on Monica Grove, Levenshulme, had a history of drug and drink problems and voluntarily became an in-patient at Edale House in February 2010. Staff did not move him or physically try to wake him up, but checked on him several times throughout the night of his death, the Manchester hearing was earlier told. Staff at Edale House mental health unit can be seen on CCTV moving Mr Thompson’s dead body across the corridor outside Grafton ward where he was a voluntary patient. The footage captures the nurses moving the corpse and mopping up the area where he was discovered dead, at around 6.15am on April 4, last year. He was declared dead by paramedics at 6.43am. Peter’s parents Rene and Alan Thompson said they were “happy” with the verdict and thanked their legal team, the coroner and the jury. Nadia Kerr, partner at Pannone solicitors who represented the family, said: “Today signals the end of the proceedings for the family, and we will be very interested to read the coroner’s recommendations.” A Manchester Mental Health and Social Care Trust spokesperson said: “We would like to apologise to Peter Thompson’s family and friends and express our deep regret about the circumstances of his death. “This was an isolated incident and does not reflect the high levels of care and dignity with which we treat our service users. On this occasion we fell short of our usual high standard and we are very sorry about this. “Following the incident we completed a thorough Serious and Untoward Incident (SUI) review of the case and produced a detailed action plan. Mr Thompson’s family were given a copy of this review and have been kept informed of the process as it developed. The statement added that disciplinary action had been taken against members of staff involved.