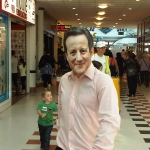 David Cameron was spotted in and around Manchester, or was it Sam a Unison Communications Officer at Rochdale ?

Manchester Service Users and The Right To Work Attacked government cuts in a full “metal jacket” in the guise of a red bus.

An open-top bright red bus did a tour of duty on the streets of Manchester last Saturday. Music blared out from the top of the open top bus as it toured in and around Manchester. Banners and posters draped the outside of the bus and it received a footballers FA Cup returning welcome from cheers of delight as Manchester folk clapped and cheered. Shoppers spotted David Cameron on the bus or was it really Sam, a Unison Communications Officer, at Rochdale, no one saying for security reason. People with mobile cameras and many with handheld video recorders, filmed the big red bus as it headed to North Manchester. Stopping at Cheetham Hill, where information was haned out, asking people to join Sundays big city march to campaign against vicious cuts to front-line services,

such as the closure of the Manchester Edale House Hospital Unit. Service Users appreciated just how difficult the journey to North Manchester can actually be. Patients and their families will see a tremendous drop in Central Manchester mental health service as patients from Moss Side, Levenshulme, Longsight and Central Manchester will loose the eighty two (82) bed recently built state of the art purpose built PFI hospital.

Manchester Central MP Tony Lloyd secured a private members debate at Westminster on the reasons for its closure.

The ‘Battle Bus” has proved an astounding success !