“A Gathering Storm” Calling All Manchester Supporters to Stand In Solidarity To Fight The Closure Of The Edale Unit!

A Gathering outside of the Manchester Royal Infirmary [MRI] will be taking place between 11:30 am and 3:30 pm on Thursday 3 rd. November, 2011. Two patient groups are to stand outside of the MRI where the threatened Edale Hospital Unit is situated. After a large meeting held at Park House Hospital that saw two of Manchester leading parliamentarians the Rt Hon Tony Lloyd MP [Labour] and the Rt Hon John Leech MP [Liberal Dems] dropping their political differences in support, to join forces to oppose the closure of the six year old purpose built unit describe at the time of being built as being a ‘state of the art’ purpose built building funded by the controversial private finance initiative [PFI]. In the UK; the National Audit Office felt that it provided good value for money overall. However more recently, the Parliamentary Treasury Select Committee found that “Higher borrowing costs since the credit crisis mean that PFI is now an ‘extremely inefficient’ method of financing projects”. 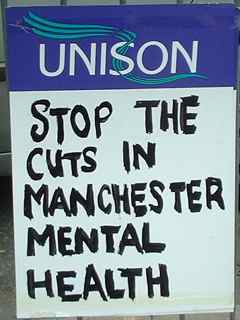 A patients spokesperson for Poles Apart a group run very successfully for people with a Bi Polar Disorder said “It is very clear that PFI may now not of been the best option for funding this clearly needed 82 bed unit in the centre of Manchester both at the time and now the need for more beds to be available is now the case, indeed there is a massive shortage of beds and the figure of 82 beds which was the requirement six years ago; that figure if medical staff were able to speak without consequence needs to be revised to a figure that is around 95 beds and if medical needs are to be truly comfortable, perhaps that figure will need to be around the 100 bed mark for the centre of Manchester”. Asked by MUNREPORTER why this person would not allow their name to be quoted, they said “If you ask anyone who works within this Trust, although it’s not only this Trust it’s a position throughout the NHS. If you wish to say anything negative about Trust policy you risk being bullied and driven from your place of work, look what happened to Nurse Karen Reissman all she said at the time has become true, yet they the Trust, wanted her banned from ever working within the NHS. We all have to pay bills and we cannot risk losing our jobs. It really is now up to the people especially services user groups the Trust fear their comments because they can do very little if customers are not happy.

Their voice is the most feared along with carers.”

People wishing to support the ‘Gathering Storm’ a reference to a storm of protest which will be meeting at the corner of Nelson Street and Oxford Road this coming Thursday 3rd November at 11:30am people will be asked to stand in solidarity and if they wish to have their photo taken for the purpose of being added to a webpage on the MUNREPORTERS web site. Manchester Users Network were approached with the idea by the cares and patients groups who have had enough of being fed untruths by the commissioners of this City, said one very angry carer who looks after her brother and said she wanted to ‘Stand Shoulder to Shoulder’ with fellow carers and patients. She added that the new Chief Commissioner wanted to meet with just her and other members of her family and without others. We said no and any meeting needs to be between both patient groups and carers. Everyone trust Alan Hartman and the elected members of the group, Alan tells it as it is and he is also a fellow patient, he has 40 odd years of representing patients.  Together we our strong, our brother is a proud member of MUN and we know we can trust Alan, who has his own problems at this moment with the sad loss of his wife Adele. We will meet with anyone as long as they do not attempt to divide us that is not an option that the commissioner should even be trying behind the backs of others. No,No,No we our having none of that”