Campaign groups from Salford, Trafford, Bolton and beyond held a rally before the march at which speakers urged everyone to fight the ConDem Government’s dismantling of the NHS and Labour councils that comply. 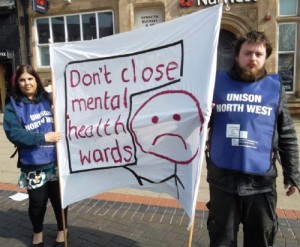 Yesterday, Eccles town centre became the focal point for the campaign against mental health service cuts in Bolton, Trafford and Salford, as well over one hundred people from around the North West, led by the PCS drumming band, attended a rally and march to Defend Mental Health Services.

The march from Eccles ended at Meadowbrook Hospital, near Salford Royal Hospital, where GMW wants to close a mental health ward and relocate it, with less beds, miles away in Little Hulton. The rally heard from a woman with dementia about the horrors this will impose on her, her friends and their families.

“We really do need to build this campaign and tell the Labour Council that these cuts are unacceptable” he added “Labour councillors all have the same answer, `What else can we do?‘ It’s a good question. Vote for somebody else who will stand up to the Tories…”

Ben, an occupational therapist for the community mental health team and UNISON steward told the crowd what it was like working on the front line of the NHS at the moment…

“I can tell you that NHS staff are not being replaced, staff are not being able to take breaks on wards, staffing is inadequate on wards, services are not safe” he said “Already, 80% of the contracts being given out in the NHS are going into the private sector. The Tories are dismantling the NHS bit by bit and the only way we can protect it is to roll our sleeves up, take to the streets and campaign. They are spinning it that these services aren’t affecting the vulnerable and that they are functioning just like they used to. It is not acceptable and not in our name. We have to campaign and stand firm against these horrible cuts.”

It was apt that the march and rally happened in Salford where service users themselves have been solidly campaigning for a number of years under the appropriate banner ofUSUC (United Service Users Committee) against cuts imposed by the Labour Council and GMW, which has involved occupying the Council chamber, protests outside offices, pickets and petitions.

“It’s a good turn out today and I’m really pleased that people have come together from Salford, Bolton and Trafford, and we’ve also got delegations from

Stockport, Liverpool and throughout the North West” Steve Cullen from USUC told the Salford Star “One of the main reasons we’ve called this rally is because we don’t agree with the proposals that GMW have put on the table, scrapping beds and wards.

“We’re going to fight it all the way” added “And we’re not going to stop until GMW take this ridiculous, stupid proposal off the table and start doing what they are there to do – looking after and caring for people in the community.”