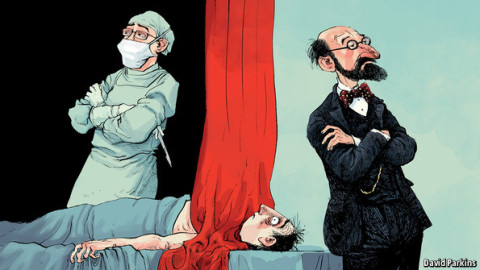 THE day after Mandy Peck tried to electrocute herself in the bath her family took her to a mental-health centre in Chelmsford and asked for help. They were told that there were no beds available and sent home. Two days later Ms Peck jumped to her death from a multi-storey car park. She left a daughter behind.

Ms Peck would not have been turned away had she arrived at hospital with a broken leg. Yet the National Health Service (NHS) often fails those suffering from a broken spirit. The numbers are fuzzy, but about one Briton in four suffers a mental-health problem at some time in their life, ranging from mild anxiety to severe schizophrenia. Less than a third of those receive treatment. That is in part because many sufferers are ashamed to seek help, but it is also due to funding gaps and disorganisation within the NHS. The result is a system in crisis, says Sue Bailey, a former president of the Royal College of Psychiatrists.

This failure is costly. Mental-health problems cause more suffering in Britain than physical illness, poverty or unemployment, according to Richard Layard, an economist and author of a book on happiness. People with severe mental illnesses have higher rates of physical illness than the general public. According to the King’s Fund, a think-tank, this costs the NHS between £8 billion ($13 billion) and £13 billion each year. Sufferers are also more likely to commit crime; mental illness has become the most common reason to claim disability benefits. Researchers at the OECD, a club of rich countries, reckon getting mentally-ill people back to work could increase employment in Britain by nearly 5%.

Part of the problem is money. The consequences of mental illness cost the British economy over £100 billion a year, according to the Centre for Mental Health, a think-tank, yet the NHS spends just £11.3 billion on the problem. Some, like Mr Layard, see misplaced priorities. Doctors spend about £3.5 billion a year treating the depression and anxiety disorders suffered by some 6m British adults—a vast amount less than is spent treating the physical ailments of roughly 500,000 patients in the last year of their lives.

Recent cuts to health spending have fallen hardest on mental-health care, just as doctors say demand is rising. The number of NHS beds for patients with mental illness has declined by over 30% since 2003. Many facilities are now full. As a result patients are having to travel long distances or wait months for care. To free up room, a mental-health centre in London has discharged patients to bed-and-breakfasts. Others are not so lucky: sufferers picked up by police are often diagnosed in jail cells. This week Norman Lamb, the minister for care, said that services for young people are “stuck in the dark ages”.

A second challenge arises from the way the NHS is structured. Mental-health care is staffed and funded separately from physical care—treatment is focused on the mind or body, but rarely on both at once. Yet research shows depressed people are more likely than others to develop heart and lung disease, and to suffer from strokes. Mental illness also appears to make diseases more lethal. On average men with mental-health problems die 20 years earlier than those without them (most from causes other than suicide), says the British Medical Association. 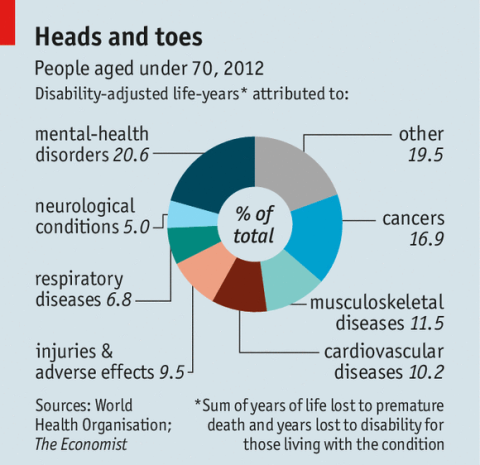 The government is alive to these problems. Britain’s spending on mental health may be inadequate, but it compares favourably with that of other rich countries. From April ministers have promised to limit the long waiting times that prevent many people using mental-health services. And in 2012 the government pledged to give mental health care equal priority to physical care, enshrining this principle as part of the Health and Social Care Act. But critics complain that the promise has yet to deliver much practical change.

Reform advocates would like better integration between mental- and physical-health care. “Liaison psychiatry” involves placing mental-health specialists in hospitals to work alongside doctors. The Centre for Mental Health found that one such initiative in Birmingham reduced the length of hospital stays and the number of readmissions and improved the health and well-being of patients. The centre calculated that the programme saved four times its costs. Yet such services are often meagre.

It would be better and cheaper to keep sufferers out of hospital altogether, says Emma Stanton, who runs Beacon UK, a mental-health consultancy. Ms Stanton recommends treatment at home through teams of doctors, nurses and social workers. Instead of swallowing antidepressants, health bosses would like sufferers of mild conditions to receive help under a programme called Improving Access to Psychological Therapies (IAPT), which aims to expand the use of treatments such as cognitive behavioural therapy. This helps individuals challenge the gloomy thinking that can lead to anxiety and depression. The National Institute for Health and Care Excellence (NICE), which evaluates treatments, considers it good value. Yet David Clark, an adviser for IAPT, says it reaches only a fraction of those who need it. He would like its budget doubled.

Convincing politicians to cough up more funds will be tough. Some critics fear that beefing up treatment of the most common mental-health problems risks saddling the system with overwhelming costs. Fortunately there is a lot that can be achieved without more cash. Many mental-health services still do not meet the standards recommended by NICE, and communication between services is poor. Elaborate therapies are not always necessary—one effective treatment for those suffering mental illness is keeping them in a job. Other types of therapy, say advocates, should pay for themselves by saving health-care costs and increasing productivity. Improving Britons’ mental health is not only humane, but economical.