Girl, 16, with mental health problems held by police for nearly 48 hours as ‘no NHS beds free’

Girl, 16, with mental health problems held by police for nearly 48 hours as ‘no NHS beds free’ 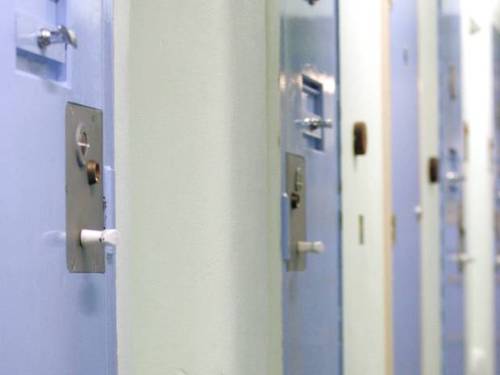 A teenager with mental health problems has been held in custody by police since Thursday night as there are no beds available on the NHS, according to a senior police officer.

The 16-year-old girl was detained on Thursday night and was sectioned under the Mental Health Act 1983 by Friday lunchtime, said Assistant Chief Constable Paul Netherton of Devon and Cornwall Police.

He branded the situation as “unacceptable” and said that police custody is not the right place for a teenager with psychiatric issues.

The girl will be moved from police custody this evening, NHS England later said. A spokesman said she would be moved to a “place appropriate for her care”. Due to “patient confidentiality”, he said he would be unable to provide much more information.

The girl was at Torbay Hospital but was reported to have been removed as she caused a “breach of peace”, The Telegraph reported, before being held under Section 3 of the act. 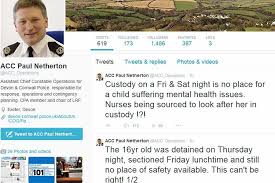 Nurses have also been sourced to look after the girl while she is in police custody as there was not one free space available for her in nearby hospitals, he added.

Under the act, young people under the age of 18 are legally bound to stay in a Child and Adolescent In-Patient Unit temporarily while mental health assessments and potential subsequent treatments are carried out.

A station cell is considered a “place of safety” for up to 72 hours under Section 136, however it is not clear whether this could also apply to minors.

Assistant Chief Constable Netherton was praised by users of the social media after he drew attention to the situation, including from Commander Chris Greany, head of the National Police Coordination Centre, who said that he had done the right thing.

Well done @ACC_Operations, who speaks because he cares deeply about people, and like all of us wants what is right for people #compassion

Commentators expressed their shock at the situation with many describing it as “appalling” and “a disgrace” while stating that cuts to the NHS and limited awareness of mental health issues were to blame.

Earlier this month the Commons health select committee said that minors as young as 12-years-old had to be detained in police cells during a mental health episode as social services and hospital resources struggled to keep up with demand.

There were 263 occasions in which under-18s were held in cells while an emergency psychiatric assessment was carried out.

Mark Winstanley, CEO of Rethink Mental Illness said: “This is a very troubling situation, but unfortunately it is far from an isolated incident.”

“If you’re going through a mental health crisis, you should be brought to a health-based ‘place of safety’. Being held in a police cell can be extremely distressing, and should only ever happen as an absolute last resort.

“But many people are being turned away from ‘places of safety’, because of staff shortages or lack of spaces. In some parts of the country, there are no health-based places of safety full-stop,” he added.