A Canadian doctor has created an app that allows medical students to view millions of medical images from their smartphones.

The app protects patients rights to privacy automatically, by blurring out identifying features. Photo: Figure One 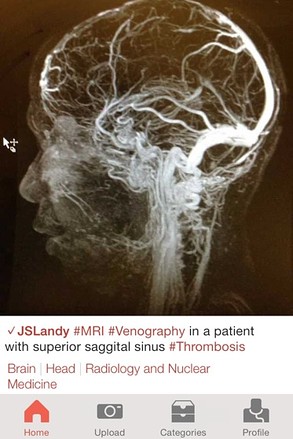 The idea for the app came in 2012 after Dr. Landy spent time as a visiting scholar at Stanford University. He studied how medical students and doctors were using their smartphones and found that image sharing for the purposes of education was commonplace. However, these images were shared without protecting patients’ privacy or indexing them in a meaningful way, despite their tremendous potential.

The aim of the resulting app is to change the status quo of “having an image sink down to the bottom of your inbox”.

Following numerous fundraising efforts, Figure 1 was launched in 2013. The app currently has over 150,000 users and has continued to grow rapidly since its inception. So far it has been launched in 38 different countries. 30% of U.S. medical students now use it and within the University of Manchester, Figure 1 is beginning to make waves.

For second year medical student Kajen Suresparan, Figure 1 has helped him learn more about the brain, “Figure 1 has allowed me to explore my interest in neurosurgery in greater depth. It’s amazing to be able to scroll through CT scans on my mobile phone”.

Figure 1 allows users to upload images of rare and/or textbook cases of illnesses and share them with medical professionals and students from around the world. Verified users can interact with each other via the comments section and there is also the option to ‘follow’ images of interest or other users, much like any other social network. This enables students and younger healthcare professionals to learn from the expertise of those who are more experienced.

One of the concerns raised by students about the app was regarding the confidentiality of images, which is a core principle of good medical practice.

However, in an interview with The Mancunion, Dr. Landy outlined in great detail the built-in tools that allow users to crop and edit their images, acknowledging just how important this issue is.

Specialised face blocking software automatically removes the pixels from images that could identify a patient from their face. Also, images are evaluated by analysts before they are authorised for publication in the app.

Although the current focus for Figure 1 is education and information dissemination, the app shows great potential as a diagnostic tool. It can allow doctors to crowdsource for complex or uncommon diagnoses and it will be exciting to see how the app develops in future.

For students with the desire to innovate in the medical field, Dr. Landy first advises “to stay in school kids. Think about a problem that you and the other people in your field face. If you’ve got an idea and you’re dedicated to solving that problem you will find success.”

Figure 1 is free to download on the App Store or Google Play.