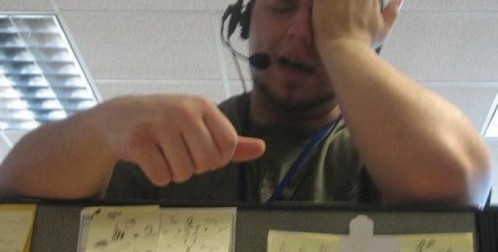 Linda also pointed to a variety of factors, including the recession, that had contributed to increased mental health issues in the workplace.

She said: “Targets are a lot more stringent than they used to be, but the recession has made it harder to sell.

“People don’t have the extra money; they get on the phone, order their items and they don’t want extra.

“Then everybody struggles, that affects their targets and then that puts more pressure on them.

“I don’t think the business targets have been worked out correctly, but that is the hardest one to resolve because it is a business decision.”

She said: “We have a lot of problems regarding if parents and carers can get time off.

“It seems legislation has dealt with parental issues but we’ve got people in their sixties that are caring for their parents; some are doing it on their own as well.”

Mental health has become more of an issue for older call centre employees, according to LInda, as they are less able to deal with the stress.

She added: “If you don’t like the environment of a call centre, the younger you are the easier it is easier to just leave.

“I spoke to a woman recently and she said she was struggling with the pressure. I said, ‘you’re making yourself ill, so you’ve got to do something about it.’ She said, ‘I’m 60 – where can I go?’”

Part of the solution, Linda believes, lies with employers and managers at call centres to be more transparent and clearer with their employees.

“They need to communicate more with people; from my point of view the best way is people need to buy in,” she explained.

“You need to explain why they look at things differently. I think as long as you can justify to people why you’re doing it they will buy in.

“At the moment, they definitely do not do this.”

Image courtesy of Katy Warner, with thanks.