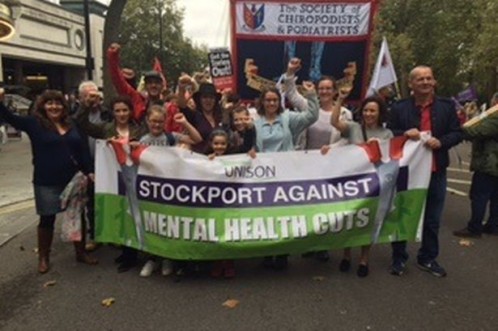 A centre offering mental health services that is facing the axe could now be saved in the face of a huge backlash against its closure.

It had been earmarked for closure as the council had sublet it from the NHS, but decided it would be too expensive to take over the lease when health service bosses exercised their right to break from it early.

But following a huge campaign to save the centre, on Chestergate, with a petition of 2,500 signatures and demonstrations, there has been a rethink.

The council has now investigated options for the service to continue – including staying where it is – and these will be put to a full council meeting.

“The challenge was always that rent for the building was funded by the NHS, meaning new funding had to be found if it was to stay open beyond 2015. The rental and lease proposed by the landlord was not competitive.

“We place real value on organisations who can help prevent vulnerable people from requiring treatment and support. However, ensuring we get value for money from these services is vital.

“Officers will be presenting options, including remaining at the centre, with a view to reaching agreement on the preferred option with considerations including cost.”

Stockport Against Mental Health Cuts led the protests. Members say in the age of severe cuts, voluntary sector services such as the centre are vital.

Sandy Broadhurst, from the group, thinks the ‘massive swell of public opinion’ made the council think again.

Councillor Sheila Bailey, who supported the campaign, said: “The council demonstrated a monumental lack of understanding about how valuable this centre is and its preventative work.

“Resources like this save the NHS on hospital admissions and the council on adult social care. Removing funding would be a false economy.

“It is credit to the will of campaigners that the centre’s future now looks considerably more secure, though we await the options the council comes forward with.”