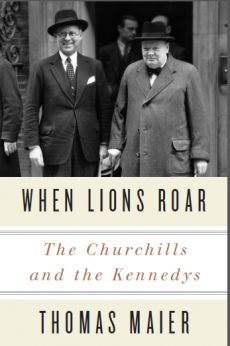 After World War II, Randolph Churchill, Winston’s only son, still believed his destiny was to become prime minister, and that the name Churchill alone would carry the day, regardless of the mounting evidence against his chances.

Many had predicted greatness for young Churchill a decade earlier, when he boldly displayed his gifts as a public speaker which seemed more impressive than his famous father. “He used all the colorful rhetoric and manners of Winston Churchill,” rhapsodized the New York Times about one of Randolph’s early speeches. “Except that he was more restrained in his speech than his impetuous father, the young Mr. Churchill showed conclusively he was a chip off the old block.”

Randolph shared these high expectations of himself. “I am not afraid to reveal . . . my two main ambitions,” Randolph declared in 1932. “I wish to make an immense fortune and to be Prime Minister.”

Despite his braggadocio and overt confidence, however, Randolph appeared tired and much older after the war. At age thirty-four, his smooth blond hair had begun to thin and gray, and his overweight body was still recovering from his wartime injuries. Unlike with his father, the election in 1945 had left him without a seat in the House of Commons and suddenly looking for a job.

In the past, Randolph had relied on writing, particularly for newspapers, just as his father had used journalism to earn some cash and promote his views in between political posts. But Randolph, caught in the maelstrom of divorce and a shortage of funds, returned to another, easier way to make money. Near the end of 1946, he traveled to America to give lectures, hoping to repeat his successful speaking tour from the early 1930s.

Americans still tended to view Randolph as the heir apparent, the next Churchill to assume power, unlike many in Britain with less regard for him. “It was perhaps just as well that America existed for Randolph,” remarked his cousin Anita Leslie. “It was such a large country to jaunt around in giving lectures—and Randolph remained excellent on the platform if not in private life.”

On the lecture trail, Randolph kept himself amused at night by excessive drinking and boorish gestures to women. “Britishly drunk all the time, soliciting respectable women at luncheon parties, etc.,” author Evelyn Waugh (“Brideshead Revisited”) complained to his agent after meeting his friend Randolph in Hollywood.

Randolph’s penchant for rapid mood changes—a sudden, almost violent intensity in his speech, followed by a period of mildness seeking forgiveness—suggested problems beyond alcohol abuse. Only Kay Halle, who’d known him since his golden-haired youth, seemed to recognize a deeper cause in Randolph’s psyche.

To Halle, Randolph confided that “he could feel whenever an illogical tantrum was going to overwhelm him”. She didn’t seem to consider this “illogical tantrum” a symptom of mental illness.  Instead Randolph described to Halle “a physical sensation that arose from the earth” and left him feeling out of control.

“If I can stop it before it reaches my knees I will be all right,” Randolph explained to Halle, his longtime friend, “but once it gets above them a black fog envelops me and I just don’t care what I say.”

In retrospect, Lady Juliet Townsend, Randolph’s goddaughter, said many of these symptoms were evident in his demeanor though never diagnosed professionally. “He certainly was a person who was very up and down,” she recalled in 2012, “and got more down than up as time went on.” His contemporaries, including Waugh, dismissed these problems as part of Randolph’s eccentricity or buffoonery, without regard for a deeper cause. “Randolph’s friendships were not very close friendships because he was so wild—people didn’t like to get too close to him,” recalled Adrian Berry, grandson of newspaper baron Lord Camrose. “My uncle Freddie [Birkenhead] regarded Randolph in slightly comic terms, not a person whom he’d confide in.”

Neither Clementine nor Winston was much for psychological analysis, and none of their correspondence about Randolph’s behavior suggests it. Perhaps the nagging sense of a family link (that his son’s erratic nature too closely resembled that of his late father) was too uncomfortable for Winston to consider. Even Halle seemed ill-equipped to deal adequately with Randolph’s raw admission. “Kay tried to train him to check this crazy creeping temper at the ankle stage,” Leslie described. “But it was no good.” Kay’s well-intentioned but amateur methods—as if his “crazy creeping temper” could be put on a leash—were no match for the “illogical tantrums” that continued to haunt his existence.

Across America, Randolph’s bad-boy antics were followed by gossip rather than political columnists. In December 1946 he was arrested for reckless driving after addressing a women’s club in Connecticut. Rather than hire a lawyer, he unwisely conducted his own defense. He argued that his eighty-mile-an-hour speed along the Merritt Parkway wasn’t necessarily “reckless” because the highway was “one of the safest in the world.” The judge failed to see his logic and fined him fifty dollars.

Back in England, the verdict was even harsher. Both his parents, Winston and Clementine, could no longer hide their disappointment in him and his adolescent behavior. Randolph’s acts of genuine heroism during the war, his insightful advice as Winston’s eyes and ears in other nations, and the deaths of friends and colleagues in battle had somehow failed to mature him or season his judgment. In his wake, all he seemed to leave behind were unpaid bills and a broken marriage, with a six-year-old son who barely knew him. Unlike Winston at this same age, who spoke of life’s brevity after his father’s death, Randolph acted as if the party would never end.

Upon his son’s return to England, Winston let it be known he didn’t care to see him, an emotional wound Randolph could not bear. In February 1947, Randolph composed a heartfelt letter admitting his faults and acknowledging his father’s disappointment in him. “As you know the only career in which I am seriously interested is politics,” he said. “While fully realizing that I have made my full share of mistakes I believe also that circumstances have not so far been propitious. But I am still young & fortune may yet come my way.”

Randolph conceded he should have become a lawyer, just as Winston suggested, but needed to work as a journalist to pay his debts. What he could not afford emotionally, though, was the estrangement of his father. “Please don’t expect too much of me now,” Randolph beseeched. “Believe instead, I beg you, that I have no other ambition than to be ultimately judged an honorable & faithful son. No day passes but that you are constantly in my thoughts & I am grateful that you think so often of me. Give me your confidence & I shall not fail you.”