I first met Don when I lived in Prestwich, North Manchester in 2005. At the time I was working with Mark E Smith of The Fall, co-authoring his autobiography,Renegade. Don (real name Gordon Charles Montgomery) and Mark go back. Occasionally they’d drop acid and get shitfaced together in the 80s, with John Cooper Clarke and Nico – two other ex-‘wich residents.

Aged 66, Don was – and still is – a fixture around the area (even now, despite his recent cancer scare). But it wasn’t until a mutual friend of ours sent me a text earlier this year urging me to look at a series of photographs he’d taken from the late 70s – early 90s, when he was working as a boiler man in Prestwich Hospital, a psychiatric facility, that I started to see him as a true undiscovered artist.

The images looked familiar to me the first time I saw them because that’s the way I see the world. It’s all about temperament. The closeness of the pictures, his democratic gaze; they abjure any embrace of obvious nostalgia. He drags you in by playing down his subject: local disorder. And if you can’t take art personally, then what’s the point?

I met up with Don to talk to him about his life as a photographer, and to find out what it was like work at the hospital.

VICE: You’ve told me before that you’ve never been influenced – or even aware of – other photographers. With this in mind I’m curious why you started to take these images – what was the initial spark?

Don: I joined the hospital in ’79. I was 30 and I’d just started taking pictures of people pissed up in pubs. There weren’t many people taking pictures in the pub then. I used to like catching people by surprise. Is that weird or what? They’d be like: ‘it’s him again – fuck off with your photographs’, but in a nice way.

Then the corridors in the hospital used to get my attention when the light was right. Nothing was considered. I just took the shots quickly, without too much knowledge or too much thought. 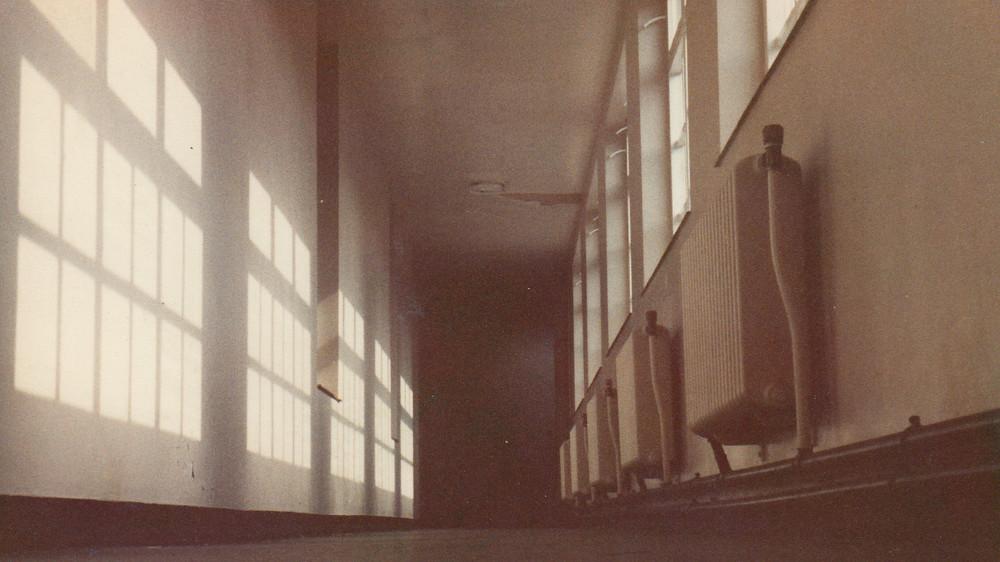 As long as the boiler ran smoothly there wasn’t that much to do until the end of the shift when you cleaned all the ashes out, checked all the oil, so I’d either read, wander round or take photos.

There’s something very attractive about discovering work that isn’t available on the internet. You say you recently rediscovered all these images in an old suitcase. I find it fascinating that you’re not overly aware of the brilliance of them.

I never thought I’d do anything with the images. I got rid of about three Tesco bags recently that were full of photographs. I’d take one roll of real film and I’d have one or two good photographs out of it and the rest were just shit. And they were expensive to process at the time. 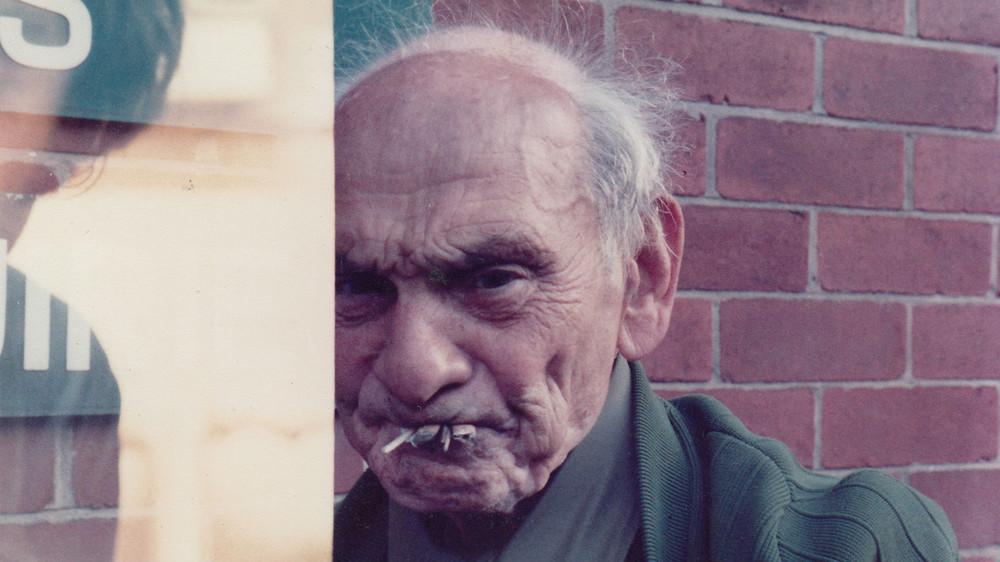 I was always skint. I remember giving my wages on a Friday to my ex-wife in the mid-80s, paying the bills for that week and having just enough for two pints of Stella. I thought what am I going to do for the rest of the week? This is when I started selling a bit of herb.

You told me once that you used to take acid sometimes when you were at work. That’s some location to be out of your head in. Surely, it influence – so influence – so to speak – on the images?
Not really. I was taking acid in the Navy before I worked in the hospital. Proper Acid: microdots; 25p to do your head in for 12 hours. It was horrendous sometimes. Oh my God – how long is this going to go on for? You just had to try and get through it the best you could. Once you start coming down when you’ve got used to it that’s when the fun begins, when you’ve cracked it and you’re still buzzing. 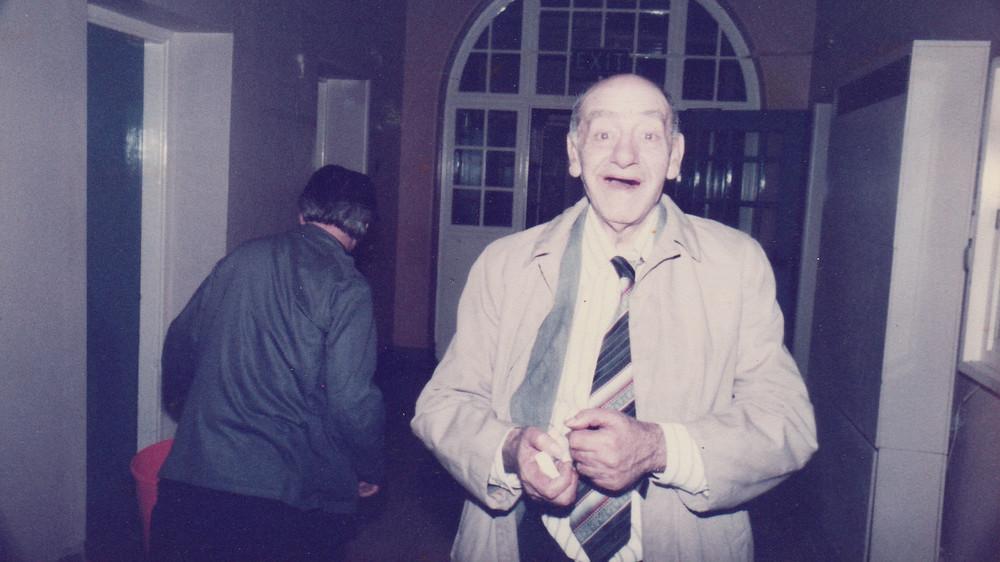 I used to smoke weed regularly and take speed. I had acid in the hospital but nothing too strong. I could handle it okay.

We used to have parties down in that boiler house as well. Nighttime. Weekends. Wine and beers. Make a few spliffs up, go and sit in the boiler room, nice and quite, listen to Frank Zappa, Kevin Coyne.

The parties weren’t planned. Main boiler man phoned me up once saying: ‘There’s a young lady looking for you here, climbing up the coal stack.’ She was there with a bottle of wine in one hand, trying to find me. He said: ‘I’ll bring her down’. This is when I was single. 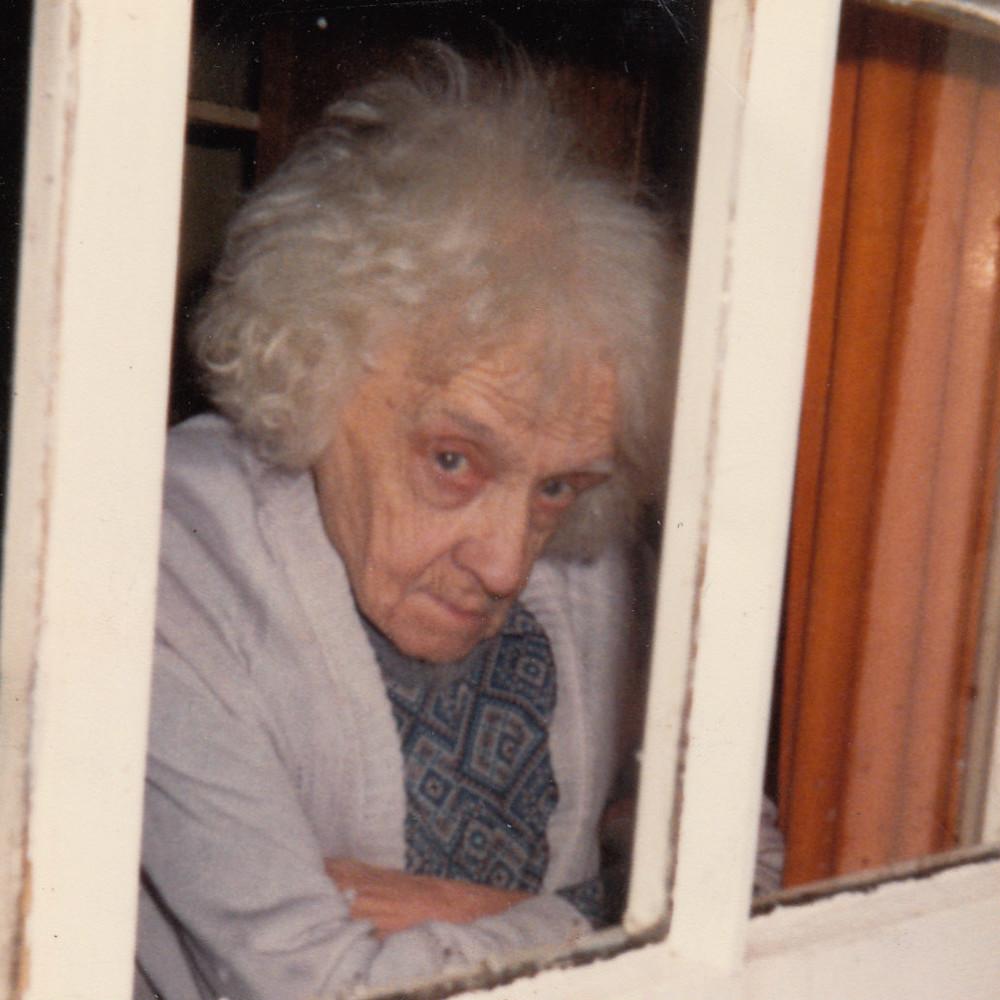 Growing up near Prestwich as a kid, we were always suspicious of ‘mental patients’. We didn’t know any better.
It didn’t take you long to get used to the place. At first you think – they’re all nutters in here – but that doesn’t last. There were some dangerous and violent ones but they weren’t dangerous and violent all the time otherwise they’d have been elsewhere. I used to go into the locked-up wards where they could only get out if the nurses let them out but I never got any mither.

Kids used to take the scare stories on board. Pretty shit really. Instead of making friends with them they taunted the patients. But you didn’t see that so much around Prestwich. 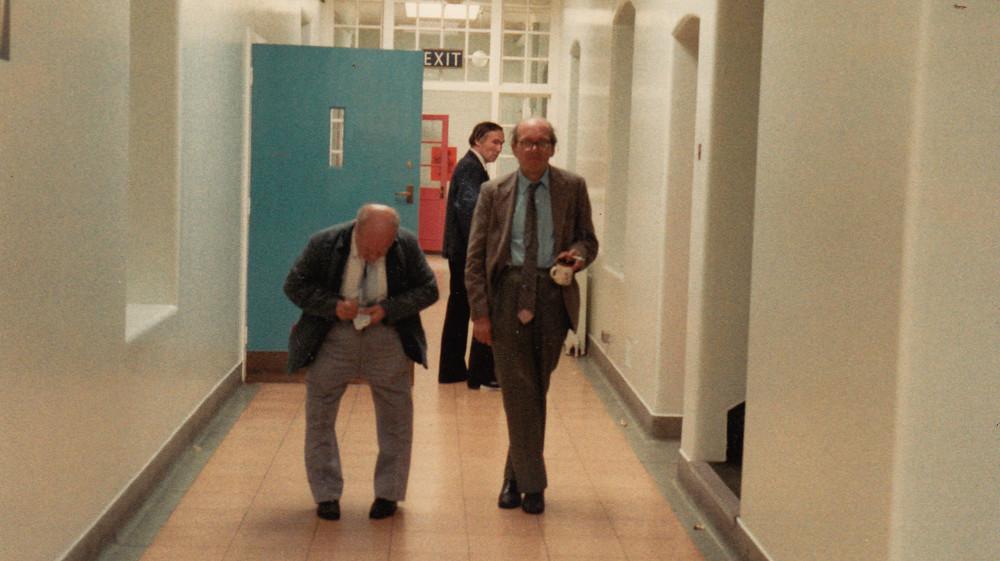 You’d see some of them and they’d never speak, never get a word out of them. But every one of them was different. You could go in the wards in the evening and they’d all be sat there, saying nowt or talking. They had their own relationships. Used to get quite a lot of shagging going on in the bushes. One was called the Petrol Pump because his dick was like that. He was always shagging in the bushes. He’d shag men and women. I didn’t see a lot of it myself.

Then you had people like Terry – there was something wrong with him – he wasn’t a complete full shilling but he could sit in the pub and have a laugh and a drink with you and you’d think: ‘maybe he shouldn’t be in a ward’. But that’s all he knew. And he was quite happy to be in a ward and go out and have a few beers. 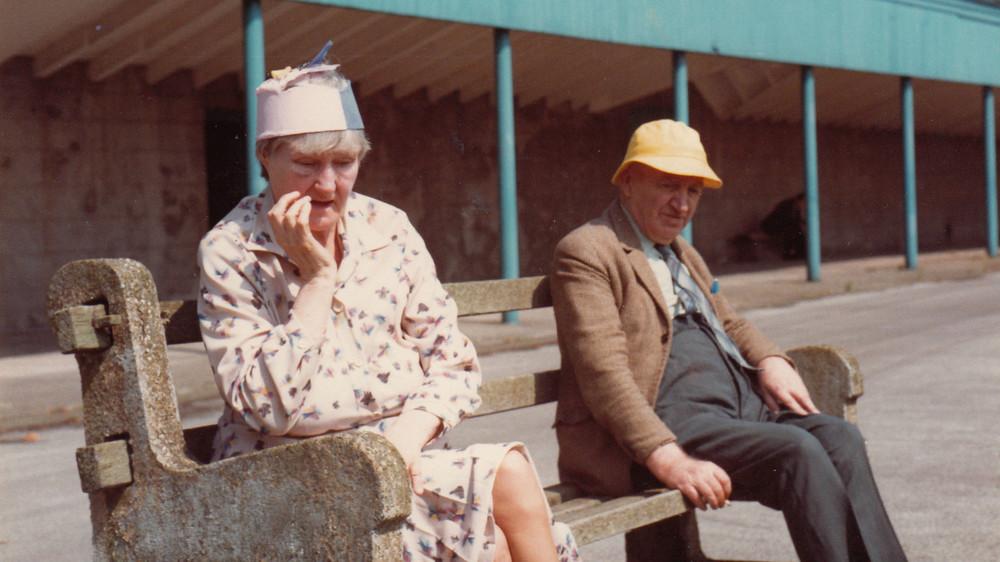 They’re not so visible nowadays. Used to be able to tell them a mile off. Nowadays, most patients are young: there are hardly any geriatric types. Back then that wasn’t the case: the way they were dressed, the medication, the way they walked, things like that; they looked dated. A lot of the time the trousers didn’t even fit properly; they were from another era, from the 50s, far away from their ankles. Their clothes would get mixed up so the nurses would dress them up in anything really. Mix and match. And some patients used to nick each other’s trousers.

The Black Eye series of images: how did they come about?
It didn’t start off as a black-eye competition. I just managed to take a few photographs in the pubs. One of them was a present: ‘Here you go Don, picture of me with a black eye.’ I then thought: bloody hell, I’ve got quite a few black eyes ones here. What gets me: most of them seem to be laughing, well chuffed with their black eyes. 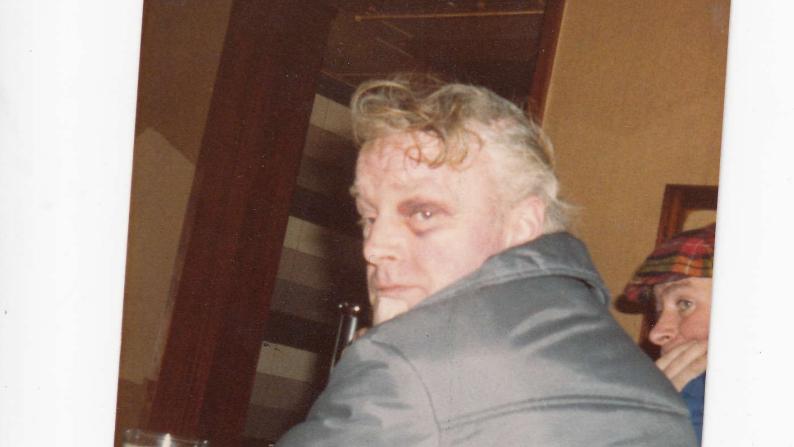 Have the people in the picture ever seen these images?
I remember taking the photographs into The Ostrich pub, 10-15 years after I’d taken them and all the lads were like: ‘Fucking hell, look at me’. They still thought they were funny.

Do you still own the camera that you used to take these photographs with?
After I lost my job at the hospital [he was unlawfully sacked for being caught in possession of marijuana] in the early 90s, I took the union to court and got 10 grand out of it. And that was at the same time I split up with my missus. I blew it all on holidays and getting pissed. Like you do when you’re in that sort of situation. I was with her for 17 years. You can actually feel the pain. Horrible. She smashed most of my things. Threw all my gear out. Camera went out of the window. Should have taken a photo of the camera, smashed on the road.

I only take pictures on my phone now. My last phone camera was great: NOKIA. It sort of put me off a bit because it was so good. 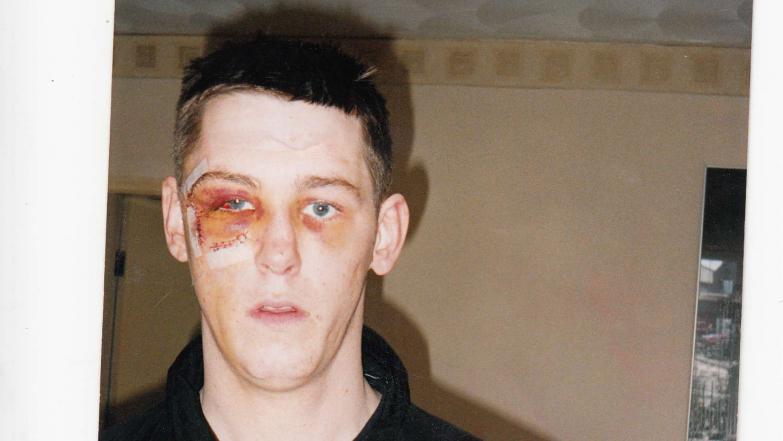 And how are you feeling after your recent cancer operation?

It was cancer of the oesophagus. I’ve not started eating properly again but I’m much better. I’ve had a good run for my money. I’ve had no big health problems all my life. I can’t complain a bit, drank like a fish since I was 16. What pisses me off is people saying: ‘you alright, you alright?’ I had one bloke the other night in the pub, who hardly ever speaks to me: ‘you alright… do you want me to walk you to the taxi?’ Christ almighty.

Additional Video research film by the Terry Wilson/ MUNReporter and is for educational purpose only the video shows Prestwich Psychiatric Hospital some twenty years or so ago   :-