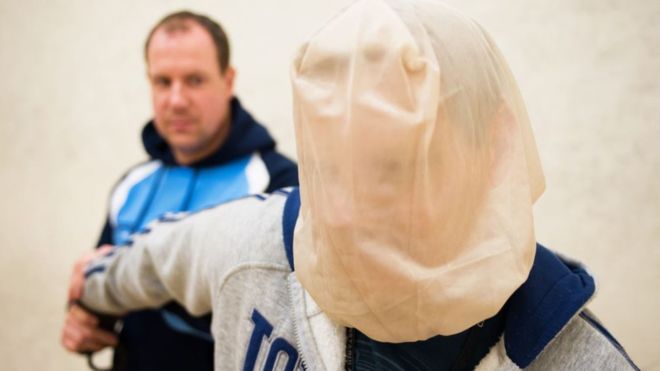 Spit hoods can only be used once

A third of UK police forces use hoods to prevent arrested people spitting or biting, the BBC has learned.

The mesh fabric spit hoods are used by 17 of the UK’s 49 police forces, a Freedom of Information request found.

Campaign group Liberty said the hoods were cruel and degrading, but the Police Federation said they “should be available as standard”.

The hoods were used on 91 people aged under 18 in the last five years, with North Wales Police reporting the use of a spit hood on a 12-year-old girl.

What are spit hoods?

Mesh fabric hoods placed over the heads of suspects to prevent spitting or biting.

They can only be used once and are usually used in custody suites or when moving people in custody from one location to another.

Critics say spit hoods are distressing and humiliating, can cause panic in the detained person, and make it harder to notice if a prisoner is having difficulty breathing.

The forces who responded to the BBC said they only used the hoods when “proportionate, appropriate and justifiable” to protect their officers.

“There is no place in a civilised society for police forcibly covering children’s faces.

“And their use on those suffering from mental-health problems will have added fear and confusion to an already distressing situation.”

The Metropolitan Police Service is consulting on whether to introduce the hoods. A pilot planned for October was cancelled after London Mayor Sadiq Khan voiced concerns.

Lancashire Constabulary, Humberside Police and Durham Constabulary are all also considering introducing them.

There are few policing issues which divide opinion as much as the use of spit-hoods.

And what these figures demonstrate is that even within the police service itself there’s no clear view as to whether they should be allowed.

One factor that appears to have weighed against their deployment is the risk of aggravating relations with black people, who are disproportionately represented at all stages of the criminal justice process.

In most areas with a significant black and minority ethnic population, such as London and the West Midlands, spit-hoods aren’t used.

The figure of 2,468 uses of spit-hoods over five years is likely to be an under-estimate, because some forces haven’t disclosed the numbers.

But it’s a tiny proportion compared to the millions of arrests made by police over the same period.

Kent Police said it decided against their use after considering “the impact on the person having a spit hood placed on them and the potential issues after their use”.

Che Donald, lead on spit guards for the Police Federation, said the hoods “can be a useful and effective piece of kit”.

He said: “There can be serious health implications of being spat at, including uncertainty of infection from bodily fluids and the need to go on to anti-virals causing nausea and impacting on personal life.

“It is important that officers are given the right tools to ensure the public’s and their own safety when managing incidents.

“Spitting is a form of assault and officers have a right to go to work and expect to stay safe.”

Forces that use them: