Mental health services in Alabama prisons are provided by a private contractor called MHM Correctional Services. According to the suit the company fails to provide adequate numbers of psychiatrists, psychologists, and other mental health providers. 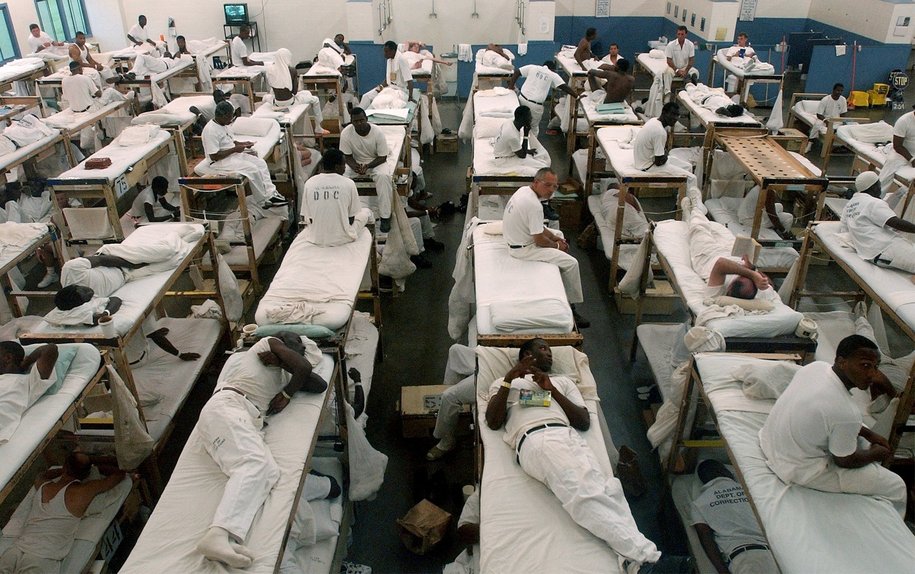 Inmates in a dorm at Donaldson Correctional Facility in Alabama

A trial has begun in Alabama regarding inadequate mental health services to inmates. The class action suit was originally filed in 2014 in the U.S. District Court for the Middle District of Alabama alleging that the treatment of inmates with physical and mental disabilities was inhumane and a violation of prisoners’ eighth amendment rights, protecting them from “cruel and unusual punishment”. The total case involved almost all of the 25,000 inmates with disabilities in Alabama’s prisons. The case was divided into parts, one addressing concerns of inmates with physical disabilities and another considering the challenges faced by inmates with mental and emotional difficulties. The portion of the lawsuit regarding physical disabilities was settled in March, with the prison system agreeing to upgrade facilities to better comport with the requirements laid out in the Americans with Disabilities Act. Today’s trial focuses on mental health services for inmates and is set to last about eight weeks.

According to lawyers from the Southern Poverty Law Centre inmates are generally denied treatment for mental health conditions, treated only with medications, provided limited supervision in their care and are often held in segregation. Said Maria Morris, a lawyer with the SPLC: “This ruling is very important for all of the people languishing within Alabama’s prisons without the mental health care they need. They need help, but many are incapable of standing up for their rights. Prison officials have failed to prevent suicides by prisoners with mental health conditions, they have denied them counselling and simply locked them away.”

Mental health services in Alabama prisons are provided by a private contractor called MHM Correctional Services. According to the suit the company fails to provide adequate numbers of psychiatrists, psychologists, and other mental health providers. The first inmate to be brought to the stand this morning, Jamie Wallace from Donaldson prison, said he had various mental health problems, including ADHD, borderline personality disorder and schizophrenia. He showed the judge cuts on his arm that he had done himself.  He told the court that he sees a member of the mental health staff about once every two months for 10-15 minutes. As many as forty or fifty other inmates are expected to testify in the case.

Alabama prisons have already been under scrutiny for overcrowding, operating at nearly double their capacity, and understaffing. There have been several uprisings, notably one in March at Holman prison in which a warden and an offer were stabbed, followed by another incident in September where are guard was killed. Officers at Holman prison went on strike in September because of unsafe working conditions. An inmate at Holman who is a pen pal of the author reported that riot squads are being brought in on a daily basis to supplement the shortage. According to the inmate, the riot squad officers retaliated against prisoners for their earlier uprisings by indiscriminately beating prisoners. He wrote “On [Nov 8th] the entire squad entered one dorm early in the morning while prisoners (most) were asleep with shotguns, long batons (like on tv), helmets, pepper spray and gas, and indiscriminately beat prisoners inflicting all kinds of injuries (broken arms, legs, ribs, collapsed lungs. Even beat guys who can’t walk and are wheelchair bound)”.

The solutions proposed have been to build three new prisons and decommission a small number of currently operating ones. Efforts to get funding for the new facilities were unable to pass the legislature. Abolitionists should be wary of such efforts, sceptical that any prisons will be shut down, particularly in light of the Trump election. Efforts to improve conditions in Alabama’s prisons can only be a short term solution.

A long-term goal must be a system in which mental illness is not treated with incarceration but with actual care, and where prisons are not used as the solution to our communities’ problems.