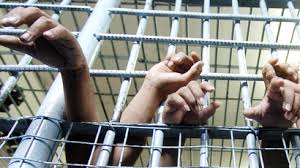 Nearly two-thirds of prisoners are believed to have some form of personality disorder. Photograph: Charles O’Rear/Corbis

Chris Grayling has ordered justice ministry officials to start work on developing a network of specialist mental health centres within prisons in England and Wales.

The justice secretary says he wants to “really get to grips with the challenge of mental health in prisons” soon after next year’s general election. “I want every prisoner who needs it to have access to the best possible treatment. I want mental health to be the priority for our system,” he said in a speech on Monday to the Centre for Crime and Social Justice in London.

The Prison Reform Trust has said 15% of men and 25% of women in prison report symptoms indicative of psychosis, compared with a rate of 4% among the general public. Nearly two-thirds of prisoners are believed to have a personality disorder, and the suicide rate has been up to 15 times that in the general population.

He said there was already some excellent work going on with the NHS to develop better approaches to working with prisoners with personality disorders. “But I think it is time to provide a more specialist focus in dealing with mental health problems in our prison estate. So I have asked my officials to begin work on options to have specialist mental health centres within the prison estate.

“I have also agreed with the secretary of state for health that our two teams will work with NHS England to ensure that any prisoner who needs to can have mental health treatment equivalent to the best they would receive in the community.”

Grayling said a national system of liaison and diversion services was being built which would mean the mental health condition of an offender could be identified during the court process and a decision taken at that stage on where to detain him.

The justice secretary’s pledge to make the mental health of prisoners a priority in the next parliament came as the chief inspectors of prisons and probation published a joint report warning that his rehabilitation reforms could be put at risk by fragmentation of the system.

However effective Grayling’s prison and probation reforms are, the report says, they will be undermined if offenders cannot access stable accommodation when they leave prison.

Family and friends remain vital to the successful rehabilitation of a prisoner on release, often providing a home, a job or access to education or training. The inspectors found that in a sample of 80 offenders released from prison, more than half returned home or moved in with family and friends, who also mainly arranged employment for the few who had a job to go to.

Their sample survey showed that half did not have employment, training or education in place six months after their release and almost half had to move in that time.

The chief inspector of prisons, Nick Hardwick, said the findings supported the broad thrust of the government’s reforms, which would lead to “through the gate” resettlement of prisoners being carried out by community rehabilitation companies. But the inspection report found there was a risk of fragmentation if work with families, providing accommodation and work or training we are all provided by different organisations.