Salford has a huge number of alerts, referrals and safeguarding issues with adults, which range from neglect to physical abuse, to financial and emotional abuse, according to a new report by the Salford Adult Safeguarding Board.

There were almost nine hundred abuse alerts, of which half became formal referrals. Vulnerable adults were most likely to get abused in residential and nursing care homes, and the abuse was most likely to be spotted by social care and health staff rather than families. 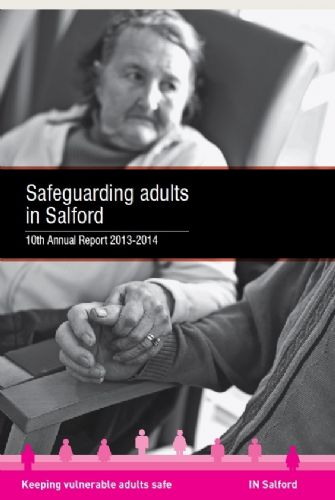 Abuse is defined by the Department of Health as “A violation of an individual’s human and civil rights by any other person or persons which results in significant harm.”

According to a new report by the Salford Adult Safeguarding Board, the city still has huge problem with the issue. Over the past three years, there have been an average of around nine hundred abuse alerts per year. Alerts are `information about possible adult abuse from members of the public or professionals’. Last year (2013-14), of these alerts, 448 were investigated and 48% were substantiated, 4% had some allegations substantiated, and 21% were `not determined or inconclusive’.

The 48% figure for cases that were substantiated is way above the national average of around 30%.

Salford Council’s Safeguarding Board believes this is nothing to worry about… “Many other councils include an optional category of ‘partially substantiated’, which has never been used in Salford” it states in the report “When this is taken into account we are close to the national average. A high level of substantiation is not felt to be cause for concern whereas a low level might indicate too many cases going through to investigation where this was not necessary.”

The main type of abuse in Salford was `neglect and acts of omission’ (42% compared to the national average of 26%), followed by physical abuse (26%), `financial and material abuse’ (18%), emotional and psychological abuse (9%), sexual abuse (3%) and `institutional’ abuse (2%).

Those with physical disabilities (40%) and mental health problems, including dementia (37%) were most likely to be victims of abuse, followed by people with learning disabilities (11%).

Most abuse happened in nursing and residential care homes (43% compared to the national average of 36%), followed by the person’s own home (33%). And in most cases (73%) the abuse was spotted by health or social care staff rather than family members (13%).

“The total number of alerts in Salford is slightly higher than most similar councils” states the report “We believe this is because there is a good level of awareness of adult safeguarding and how to report it.”

The report gives the example of the police making 1,480 welfare reports, and the ambulance service making 350 welfare reports… “a significant increase on 2012/13 where the equivalent figures were 1,200 and 120 respectively” it states “Clearly there has been an increase in the sharing of information between agencies, which is a good thing.”

In 2013-14, six cases of abuse were reported to the Adult Safeguarding Board, two were serious case reviews and four are ongoing. Meanwhile, there were 57 applications for Deprivation of Liberty safeguards `who lack mental capacity in the area of personal safety’.

During the year, one home was closed down and nine care and service providers for adults are still under investigation or awaiting investigation. Three services stopped working in Salford during the year – one domiciliary care provider and two care homes. The report states “There had been concerns about all three at some point over the last two years”

While the Board lists a whole series of improvements in its safeguarding service, the report concludes that cuts could undermine its work…

“The major challenge in the last year has been maintaining a strong and cohesive approach to safeguarding across services, which are facing reductions in financial resources and fundamental organisational changes (particularly in the NHS)” it states, and the Board’s iIdependent Chairman, Steve Pugh adds: “Reductions in funding have made it very challenging to maintain, let alone improve, a quality service.”