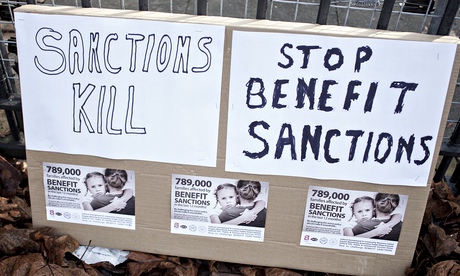 A poster against benefits sanctions in Salford. Photograph: Steven Speed

For four months – including Christmas 2012 – David was sanctioned by Jobcentre staff for failing to turn up for an appointment. His jobseeker’s allowance payments were immediately suspended and with it his housing and council tax benefits. His pre-existing rent arrears rocketed. “Christmas was bad,” says David. “It felt like I’d failed the kids. There was nothing I could do.” He says that being sanctioned, and the hardships that followed, led to him trying to take his own life at his dining-room table.

“We didn’t have a penny to our name the day it happened,” says David’s partner, Sarah. “Me and David would go for days without food so the kids could eat. The cupboards were always empty.” Both David and Sarah grew up in care homes, leaving at 16 without qualifications. The week before David was sanctioned, he passed his Security Industry Authority test and his badge was confirmed. He was on the verge of becoming a security guard, his first job for years. “There’s nobody around when you’re a security guard; you’re there on your own and it’s an easy enough job – I don’t know, it’s quiet.” But since March 2013 he has been on sick leave with severe depression.

David’s story is not uncommon in austerity Britain. In July 2013, David Clapson, 59, was found dead in his flat in Stevenage from diabetic ketoacidosis, two weeks after his benefits were cut. And new information provided by the Disability News Service via a freedom of information request has uncovered that the Department for Work and Pensions has carried out 60 peer reviews following the deaths of customers. A peer review, according to the DWP guidance for employees, must be undertaken when suicide is associated with DWP activity to ensure that any DWP action or involvement with the person was appropriate and procedurally correct.

Many of those visiting Salford Central food bank, run by the Trussell Trust, have experienced benefits sanctions. The refuge provides half a tonne of food each week to Salford’s residents and was expected to have fed more than 3,500 individuals by the end of 2014. More than 60% of those who come there have had their benefits sanctioned, according to an internal report by Salford city council. The report concluded that sanctioning could lead to extreme hardship, reliance on loan sharks, shoplifting and depression.

“A lot of people at the moment are just struggling to make ends meet. We’re here in a moment of crisis,” says 41-year-old Scott Tulloch, the local food bank coordinator. “We had a gentleman walk seven miles for three days’ worth of food and then walk seven miles back. Another family who came through the doors couldn’t even afford nappies for their child and were actually using a carrier bag and kitchen paper. Things are tough.” 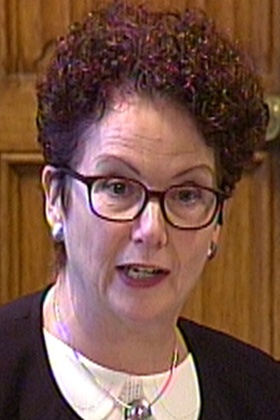 Hazel Blears, the longstanding Salford and Eccles Labour MP, says: “I’m not soft on benefits, I never have been. But if you have a system that has an expectation, then that distorts the whole system because decisions should be made on the evidence, rather than a pre-determined set of quotas.

“The evidence in the report provided by Salford council shows me that the communication between the people running the system and the people on benefits is really poor. Neither side seems to understand the circumstances and the knock-on implications of sanctioning. Just being aware of the person you are dealing with is the single most important thing for me.”

Citizens Advice has been highly critical of prolonged sanctioning of jobseeker’s allowance claimants, especially after the minimum sanction period was increased from one week to four in October 2012.

Gillian Guy, chief executive of Citizens Advice, said: “Four-week sanctions are wreaking havoc with people’s ability to find work. People need a transparent system that can take into account their situation, set suitable work-search requirements and, where appropriate, apply sanctions at a level that won’t limit their chances of employment.”

The DWP said: “As the Oakley review acknowledged, sanctions have a vital role to play in the benefits system and we accepted his recommendations to simplify communications further. As part of this, we always make clear to job seekers the conditions of receiving their benefits and if they fail to meet those conditions.

“We also continue to spend £94bn a year on working-age benefits, so we have a strong safety net in place. If claimants demonstrate that they can’t buy essential items as a result of their sanction, they can apply for a hardship payment.”

The real names of David and Sarah have been changed to protect their identities.

Please Give your views on this story by leaving your comments below !