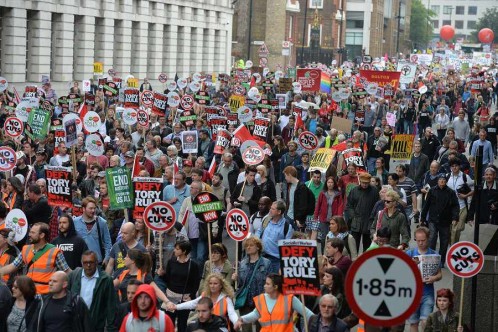 Organisers said they expect hundreds of thousands of people from all over the country to flock to London for the rally – anticipated to be the biggest in years.

Celebrities including singer Charlotte Church and comedian Russell Brand are expected to be among the crowds who will march through the capital today.

Sian Bloor, 45, a primary school teacher from Trafford, near Manchester, warned that children “are being robbed of their childhood” because of swingeing Government cuts.

She said: “We have seen a huge impact on our work at primary school.

“I regularly bring clothes and shoes for children and biscuits for their breakfast, just so they get something to eat.

“You can see how children are being affected by the cuts.

“Children come into school concerned because they are being thrown out of their house and have nowhere to live for the upteenth time that year because their parents’ benefits are being cut.

“They are being robbed of their childhood.”

Sam Fairbairn of the People’s Assembly, which is organising the protests, said: “It will be the start of a campaign of protest, strikes, direct action and civil disobedience up and down the country.

“We will not rest until austerity is history, our services are back in public hands and the needs of the majority are put first.”

Anti-nuclear activists will be among those taking part.

Kate Hudson, general secretary of the Campaign for Nuclear Disarmament, said mass mobilisation was key to persuading the new Government not to renew the Trident nuclear weapons.

Lindsey German, convenor of the Stop The War Coalition, said: “I will be marching because I am fed up with all the main parties saying they are going to promote austerity. They have made the rich richer and the poor poorer and they’re going to continue.”

Union leaders and campaign groups will highlight the impact of spending cuts on public services, the NHS, welfare and education, and warn of the effects of fresh cuts expected to be announced in next month’s Budget.

The student, who has just finished his A levels, said: “I’m a strong believer that the Tory politics of austerity are fundamentally failing and on economic and social level.”

He said he has seen friends with mental health problems have their benefits cut.

He branded the cuts “morally repugnant” and said it was his duty to protest.

John Rees, one of the march’s organisers, said people are angry because they hoped to get “a government that might ameliorate cuts, and they have got a government that is going to double austerity”.

But he said that while protesters are angry with the Government, he is expecting the march to have a “festival atmosphere”.

Russell Brand arrived at the protest and was mobbed by young fans who took selfies with him.

Young people on the march flocked to the star, shook his hand and told him how much they admire him.

He declined to talk to the press, explaining that he is “not really working today”.

Charlotte Church said austerity is “unethical, unfair and unnecessary” as she joined crowds at the front of the march in London.

Brandishing an End Austerity Now placard, she said she was proud to join demonstrators – posing for photos with some.

She intently listened to a string of speakers who railed against cuts.

She said: “I’m here today in a show of solidarity with everyone here – it is a massive turnout – everybody who thinks that austerity isn’t the only way and thinks it is essentially unethical, unfair and unnecessary.”

Asked if she was inspired by the surge of the Scottish National Party she said “absolutely”.

She added: “But I think that the Scottish have been able to galvanise themselves against the Westminster elite.

“We are in one of the richest nations in the world and social inequality is unacceptable.

“I’m immensely proud to be here. I think this is a brilliant movement and it is for the common good. We are here to make a stand.”

Red flares were let off shortly after the march began, filling the street with thick, scarlet smoke.

A party atmosphere swept through the protest, with the demonstrators led by three brass musicians playing a medley of tunes, the march snaking through London as a helicopter hovered overhead.