Photographers Wanted: We want to show Manchester the ‘bigger picture’ of what cuts to mental health services will mean. That’s why this Saturday, St Valentine’s Day, we want anyone and everyone who’s got any connection with wanting to stop cuts to Manchester mental health services to come along and gather on the steps of Manchester City Councils Town Hall in Albert Square at 11am prompt this Saturday, Valentine’s Day .

Please bring your banners, flags; logo’s, your hearts to show our Solidarity in standing shoulder to shoulder against “killer cuts” to Manchester mental health & cuts to homelessness support. 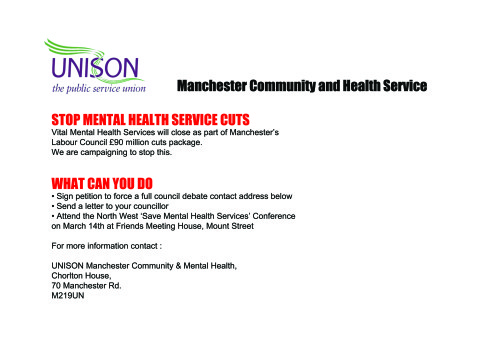 If you’re a photographer, a student of photography, or are working as a photographer, working in the press or you just take photographs as a hobby, we want you to give 15 minutes of your time to take some pictures to help the homeless of Manchester and to help show the “Bigger Picture“of how cuts to Manchester mental health impact badly upon our City and it’s people. The best photographs will be used in campaigns to explain to the public “The Bigger Picture” of what cuts mean to mental health services and those who need them.  Of course the photographs which are used will carry the name of the photographer. This will make a great addition to anyone’s portfolio.

In the last few months no one can hide from the facts that more and more people are sleeping rough in temperatures that have dropped to freezing. Sadly, but predicatively, there have been deaths amongst the homeless folk. Many suffer from sever and enduring mental illness. Cuts to mental health affect everyone. We all have mental health some have good mental health and some poor mental health. Some of the service users (patients) may have had an undiagnosed Serious Mental Illness (SMI) compounded by past trauma issues, poor coping mechanisms and personality disorder. Some are often difficult to reach and mistrustful of anyone representing authority. Often they end up homeless due many reasons.

If you can take a photograph we want you to take pictures of all the people we expect to turn up at the Town Hall steps on Saturday morning, St Valentine’s Day. People Including nurses, doctors, their patients, carer’s, and the victims of homelessness and Mancunian’s who love Manchester all are expected to attend.

Mancunians: If you Love Manchester come along and help stage the heart. Because government is not listening to its people and sadly our councillor’s feel they need to make cuts to the most vulnerable amongst us. Many services users have been stepped down (Meaning Discharged) many after more than thirty years of being under hospital care which has kept many well. This is not because their mental health has improved. Their diagnosis is often one of a severe and enduring mental illness. Sadly, no it’s because of bad management, the closure of a brand new state of the art mental health hospital unit in Manchester called the Edale Unit based at Manchester Royal Infirmary (MRI). It now means that patients who become unwell having to go to other Cities to be treated, often far away, from families and their loved ones. It has also been shown to double the cost of the original treatments. So the knock on effect now means treatments are now being rationed and many of our patients (Service Users) have been discharged (Stepped Down) back to their GP’s care .

GP’s are angry at the mismanagement of previously good mental health services which kept their patients well. Patients who received the best treatment of all, good mental health nursing with talkative treatments, remained well and were helped to feel part of their community. 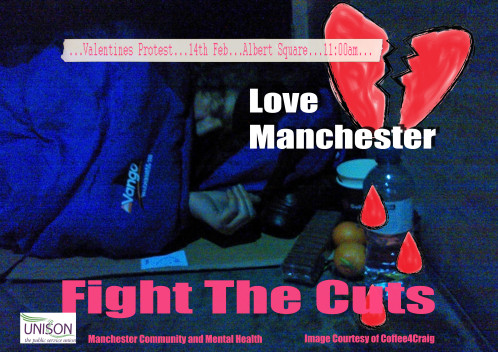 Please write to your MP. Manchester needs a Mental Health Service fit for purpose and one that honours our City instead of shaming it.

The artwork is by Manchester’s well known painter of the homeless Elton Darlo whose art work is presently being displayed around the country and abroad. Thank you Elton, for your very kind permission to allow us to use your paintings to “Stage the Heart” on St Valentine’s Day.

Manchester Users Network wishes to say thank you to the Manchester Branch of Unison, Ben Jackson, in particular to Jane Lee Mental Health Occupational Tharapist and to the charities Coffee4craig (@coffee4craig) and Booth Centre, for their help with distribution of post cards to advertise this event.

Coffee4Craig feeds hundreds of Manchester’s homeless without this help of nourishment many would die.

When one of the founder’s brother Craig passed away on the streets due to mental health and substance addictions she knew it was time to do something. They set up Coffee 4 Craig and as a result there is now more awareness, more people off the streets every week and have given scores of regular volunteer’s opportunities to feed hundreds every weekend.

If Manchester City Council makes further cuts to mental health and to homeless services people will die.  Manchester Users Network (MUN) on the 18 Th December, 2014 on behalf of services users pleaded in public with Manchester City Council’s Health & Scrutiny Committee Councillors not to cut theses vital services due to the pressure which the system is already under. MUN informed the City Councillors of the situation in Manchester mental health and of  the situation of more and more people attending Coffee4Craig and that if mental health services which Councillor Paul Andrews admitted were now down to the marrow (his description)  then lives would be lost. MUN will seek legal action  if the city council cut these vital services.

Coffee4Craig has already seen a huge increase in the amount of young homeless people it supports coming to their street kitchen three nights a week, without the support of Coffe4Craig these very vulnerable people often suffering a mental health illness would not survive.

Manchester User’s Network [MUN] Aims: To support users and ex-users of psychiatric services in Manchester and provide a forum for users to have a bona fide say in planning and provision of mental health services. 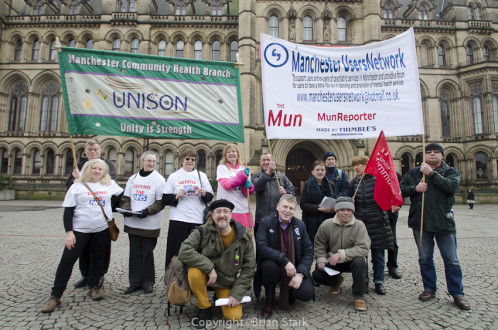 Outside Manchester City Town Hall members of Unison, Service Users, and members of the public gather to tell Councillors not to implement Killer cuts. 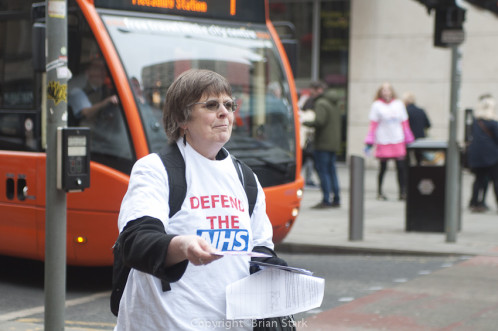 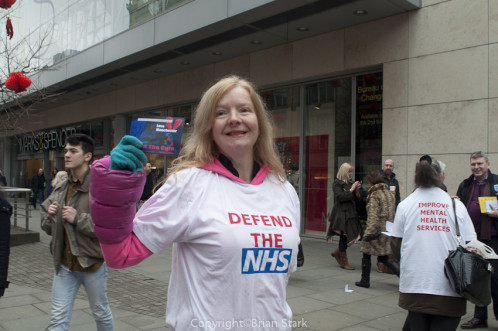 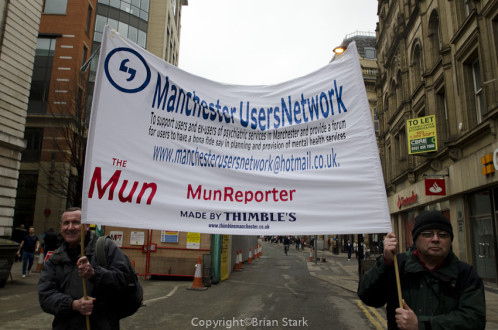 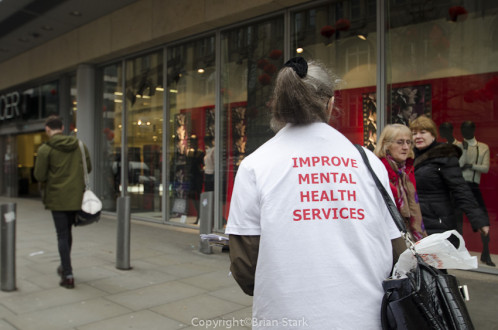 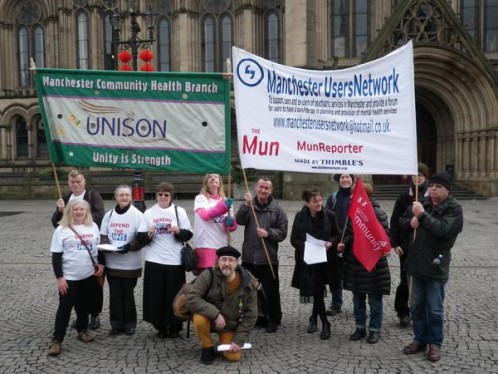 Unison members and MUN members join outside Manchester City Town Hall to send a massage that cuts are not acceptable after years of patients receiving poor services and the closure of the PFI built hospital, Edale Unit which closed after only seven years of operating, leaving central Manchester without a hospital service. It now means patients are being sent far away to other Cities due the lack of bed stock. The tax payer still pays the near £2 million a year bill and will for the next thirty years. Patients want Edale to reopen.