Cuts to Manchester’s mental health services will ’cause more deaths’, warned a local patient support group as they lobbied outside the Town Hall yesterday.

Manchester Users Network,  a support system for patients accessing psychiatric services, lobbied ahead of a health scrutiny meeting that took place after a devastating £7million worth of cuts to its services.

It is reported that Manchester Mental Health and Social Care Trust will be abolished, as its financial position has become untenable.

NHS bosses have planned meet next month to discuss a replacement institution.

But this will likely impact thousands in Manchester, as one in four people in the city are sufferers of mental health problems. 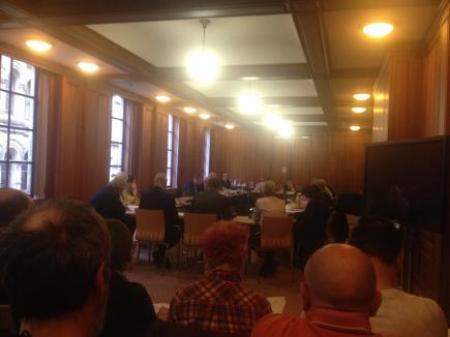 SCRUTINISED: Mental health proposals under fire at the city council

Paul Reed of MUN believes that the trust have been careless with their expenditure and haven’t been brought to account because of the stigma attached to mental health.

He told MM: “This trust has tried to pretend that depression is like having a cold, but it’s neither here or there.

“These are people that kill themselves! That’s how neither here or there it is. It’s causing deaths.

“It’s deplorable. People are scared of talking about it, people don’t complain. It’s not like taking someone’s heart and kidney’s away, it’s taking away their mental health.

“If you start complaining about it you’re going to be seen and the trust knows this.

“All these preventative therapeutic activities and safe spaces like halfway houses, they’re exactly those facilities that are saving lives.

“This trust and council are going to close those facilities. So it’s already male suicide capital of Europe, what’s it going to be like after these cuts? It doesn’t bear thinking about.”

The MMHSCT is predicted to be £6.1million in deficit by March 2016 and have planned to make a total of £7million in cuts to break-even.

It is claimed that the trust have already made £3million in savings, but will have to find another £4million, including the latest cuts.

It has blamed a number of factors, including £2million in redundancy costs due to council cuts, high spending on private beds due to shortages in NHS spaces and cuts to NHS funding.

DEMONSTRATOR: One of the very few lobbying outside the city centre

Alan Hartman, 67, from Crumpsall, has suffered from mental health issues for 45 years. He believes people need to openly speak about their problems to prevent more deaths.

He told MM: “People are getting more ill, and nationally people are being sectioned more and more. It’s a short term vision.

“I kept getting offered medication and being offered a higher dosage. I don’t believe in drugs. They don’t solve the problem.

“We should stand up and speak our mind. I’ve seen such a lot of people die. They lose contact with professionals and go to benefits assessment, which can actually cause suicide.

“Without any money, in poverty and being mentally ill is very, very worrying. The crisis will increase immensely. People need treatment.

“It’s a mess. They think they can just treat you temporarily and abracadabra, but there’s no magic treatment. I’ve had mental problems for 45 years.”

A spokesperson for MMHSCT said it had already made a number of savings to relieve financial pressures.

But they added that it had ‘not been possible’ to achieve the expected level of savings without affecting other service areas.

The proposals put forward are making ‘best use’ of the resources available and will continue to provide ‘high quality services’ for people who are in need and at risk.

Service users affected by the changes will remain in the system, and mitigating actions will be taken wherever possible to ‘minimise’ the impact on those affected through the cuts proposals.

It had been a ‘difficult’ decision, they said.

The MUN have since offered proposals to make changes to some of the services within the finite resources that are available to the trust.