Next Saturday, service users, activists, families and health workers will be holding a march and rally to Defend Mental Health Services in Bolton, Salford and Trafford.

Health bosses want to close mental health wards in Salford and Bolton, while cutting community support and the march is in protest against axing key services for some of the most vulnerable people in the area. 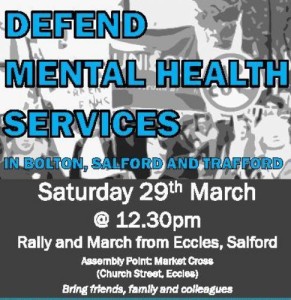 The Greater Manchester West Mental Health Trust (GMW) is currently carrying out a consultation to slash mental health services. The consultation ends on 31st March, but before that, on the 29th March there’s going to be a big march and rally, beginning in Eccles and ending at Meadowbrook Hospital, near Salford Royal Hospital, to draw people’s attention to the cuts.

The GMW wants to `redesign‘ older adult mental health in-patient services, slashing the number of beds available for people with dementia, acute anxiety and depression in Salford by almost a half, and closing the Claremont ward at Meadowbrook in order to `re-locate’ it, with less beds, miles away at Woodlands in Little Hulton.

It also wants to shut down the Hawthorn facility in Bolton, reducing overall beds in both areas by 54 (see previous Salford Star article for full details – click here). There is a also a risk that mental health hospitals in the area could be closed completely in the future, and centralised into one, `asylum-style’ centre.

There has been a promise of replacement community services, with three visits a day. But Steve Cullen, of United Service Users Committee (USUC) argues that this won’t be adequate…

“We believe people are being given false promises for community care” he explains “We have calculated the money promised will not pay for anywhere like three visits a day and allows for, at best, two visits of only five minutes each. It means the service is likely to be about giving medication with no time for other support or treatments and is far below what the glossy brochure promises.”

Paul Gerrard, from Salford Against The Cuts agrees…

“With numbers for both elderly and mental illness rising, this is not the time to cut beds” he says “Community care should be increased without cuts in beds. Britain is a rich country. We could afford billions for the banks. We are only asking for a few million. We cannot let our services be cut and risk them becoming a disaster like Mid Staffordshire.”

The final decision on the future of mental health services bed cuts and closures will be made after 31st March. In the meantime, the march and rally will be opening up the proposals to a much wider audience.

The march is supported by United Service Users Committee, Salford Against Cuts, UNISON Salford, Bolton and Trafford branches, Keep Our NHS Public plus others.