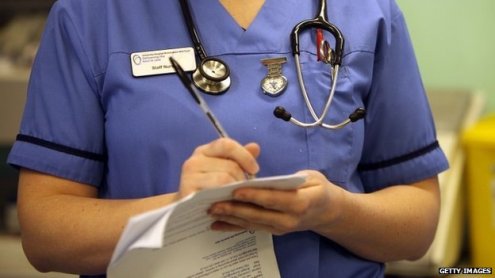 According to the RCN’s figures, mental health nursing posts declined by 8% in the past four years in England.

In Scotland, Wales and Northern Ireland, posts were cut by 1%.

However, the total number of nursing posts has increased since 2010 in all countries of the UK.

Mental health nurses are specifically trained to work in mental healthcare settings and treat and care for people with a wide range of illnesses and complex needs – from dementia to schizophrenia.

Mental health is widely recognised as a specialist area of nursing.

Dr Peter Carter, chief executive and general secretary of the Royal College of Nursing, said cuts to mental health services could have a real and lasting impact.

“We are running the serious risk of turning back the clock and undoing all the good work that has gone before.

“Money is tight in the NHS but if we are serious about treating mental illness in the same way as physical illness, then people must be offered what they need before reaching crisis point.

“If staffing levels and services are cut back further, then services will continue to crumble, which would be a tragedy for us all, to say nothing of all the thousands of private tragedies that could result.”

“Nurses are being forced to take a risk-averse approach to care which prioritises keeping people safe, rather than helping them get better.

“Not only is this detrimental to the quality of care that people receive, it makes little financial sense.”

He added that reducing nursing staff levels and skillsets would end up with more people needing long-term support, including expensive hospital treatment.

The RCN wants the government and healthcare providers to ensure that they have enough staff with the right level of skill to deliver the care needed.

With almost one-third of mental health nurses aged over 50, the RCN says a long-term strategy is needed to recruit and train more of them to deliver care in the community and inpatient units.