SALFORD AND MANCHESTER PROTESTS AGAINST ATOS

Over seventy people, including the disabled, trade unionists and health workers, joined a demonstration outside ATOS Salford offices yesterday, part of a national protest in 144 locations across the UK.

A rep from Manchester Users Network told the crowd that “Hundreds of people on the point of death are being classed as fit for work and something has to be done to draw people’s attention to it”. 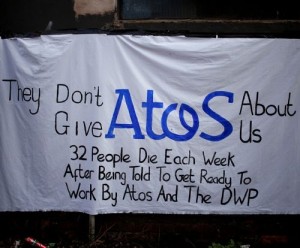 A huge banner attached to the wall opposite the ATOS Assessment Centre, at Albert Bridge House on Bridge Street, said it all…

In front of that banner, over seventy people gathered imploring the public to wake up to the fact that the Government and its French disability assessment agency, ATOS, is forcing ill people back to work as a ploy to cut benefits. A rep from the Manchester User Network pointed over to the ATOS offices and explained…

“There are people literally dying yet they’ve been classed by people over there as being well enough to work…people’s attention needs to be drawn to the fact that this is happening, day after day, week after week, not in dozens but in hundreds. People on the point of death are being classed as fit for work.” 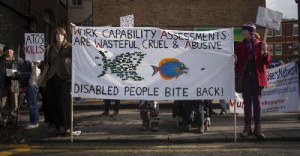 Indeed, last year whistleblower Greg Wood exposed the ridiculous tests that many disabled people have undergone at the hands of ATOS – a process he revealed as unfair' andskewed against the claimant’. People had been found fit to work on the company’s medical assessments simply because they got the bus to the interview. An incredible forty per cent of initial decisions to class people as fit for work have later been overturned on appeal.

Next to the anti-ATOS banner on the wall was also a Wanted poster for Thierry Breton, the ATOS chairman coining in £2.3million a year from disabled people’s misery. Wanted for `crimes against disability’…

“I’m here to protest about the disgraceful way in which ATOS is treating disabled people” Dave Walworth told the Salford Star “ATOS do not use trained personnel, and I have a lot of friends and family that have had problems. This is an uncaring ConDem Government.” Dave’s mobility scooter carried a sign with a Horlicks sachet attached to it reading `ATOS and Ian Duncan Smith: Here’s something to help you sleep at night’

“ATOS, in particular, is a really evil example of what the Government is about and that’s why I’m here today. They’re talking about getting people that are fit to work into work but really it’s just an excuse to cut benefits, like everything else that’s going on.

“As civil servants and trade unionists I wonder how far we go in implementing cuts that are evil; do we have a duty to do something about it?” he asked “That’s a debate that PCS might have to have because we are being used to visit sanctions on unemployed working class people.”

At 1pm campaigners brought cars to a halt on Bridge Street for a minute’s silence for those disabled people who had lost their lives as a result of ConDem Government and ATOS actions… “I feel that they want us to commit suicide” said a member of the Manchester User Network, while another added, “This isn’t a recession, it’s a robbery.” 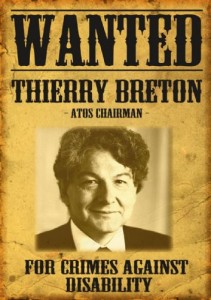 The joint Salford and Manchester demonstration was part of a national day of action that saw protests outside 144 ATOS assessment centres throughout the country. In Southend, ATOS workers actually walked out in sympathy and joined the protest happening outside their office.