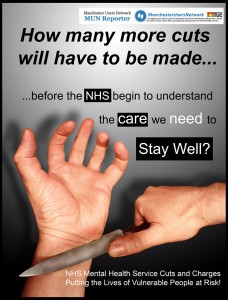 “It Is Time To Be Heard”

A group of patients have designed posters and MUN has agreed to run a campaign that will be asking government to stop killer cuts to our services. Can you do better and design a poster that tells of the cuts and how they are affecting you and your family ?

We need posters that tell your story in the run up to the government coming to Manchester on Sunday the 29 TH September, 2013, for their annual conference. For the best posters judged by one of our service users groups, Manchester Users Network (MUN) will be offering in way of a prize, £25:00 worth of gift vouchers to the person who’s poster is judged best and tells the government how it really feels to be without mental health services due to cuts !

Date to get your poster designs in: Must be in by Monday 2 nd September, 2013.

Please send to: Tell The Government How Cuts In Mental Health Are Causing Deaths Poster Competition !